Children of the Fallen Sun 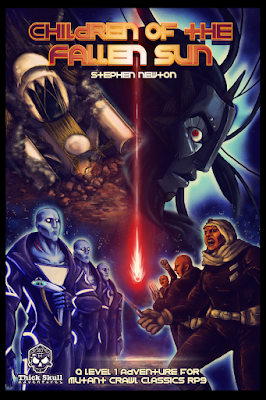 Disclosure: I wrote the ADEONA patron AI write-up for the successful Kickstarter for this adventure. Because of the thematic similarities with The Tribe of Ogg and the Gift of Suss, I encouraged the author to create subtle links between the adventures.

The adventure includes plenty of new artifacts, a new mutation (AI thrall), and three new monsters. The adventure is open-ended, and the PCs are likely to spend as much time talking to representatives of the various factions as they are fighting. Not that there are insufficient opportunities for combat!

It also includes not one, but two, full AI Patron write-ups.

The star fell from the heavens, its long red tail ripping the sky like a bloody, dripping wound. All eyes of the tribe—mutant, manimal, and plantient alike—were transfixed by the resulting explosion seen far off in the horizon.

Some proclaim this is the Second Death, foretold within the Ancient Prophecy. But one venerable sentient redwood recognizes it as the Sky Ark of the Ancients, whose mysteries must be explored before they can be exploited by the tribe’s enemies. What perils and mysteries will lay within the Sky Ark? Only the heartiest of your species have a chance of surviving the dangers that accompany the arcane ancient technology developed by the Children of the Fallen Sun.

When the Sky Ark of the Ancients falls from the sky, it's up to a small tribe of mutants and manimals to uncover its mysteries.

This product is not yet available, but I will update the entry when it is!