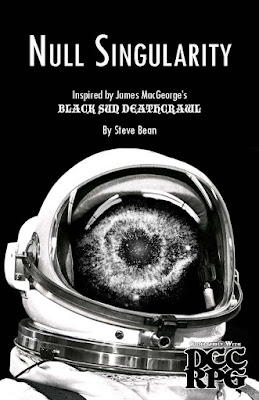 Null Singularity is a bleak adventure written by Steve Bean and inspired by James MacGeorge’s Black Sun Deathcrawl. Images are fair use or public domain. The publisher is Steve Bean Games.

The author gives "Thanks to Lakobos Eight Fourteen who showed me a new view of The Void" and dedicates the product to "Therizo Nineteen-Sixty-Eight who has tethered herself to me, searching for the Way Past, even though there isn’t any". The product also contains XenoExegesis by James MacGeorge, author of Black Sun Deathcrawl.

In this adventure you play a Voidant who encounters the Null Singularity and the Void. In this nihlitic adventure, there is no winning. There is only drawing out losing as long as you can, and with as much style as you can.

If you've read my notes on Black Sun Deathcrawl, all the same applies here. Use it as a one-shot. Use it as a future that the PCs then have to try to avoid. Use it as a vision of hell. Regardless of how you choose to use it, it is a brilliant piece of writing.

Life sought to flee from The Singularity.

Unprepared, it flung itself out into The Void,
a place anathema to life.

But that is nothing
when compared to the Null Singularity.

Life learned F/Utility. Matter is more empty than not,
making the Null the greater part of matter, putting it
EveryWhere and EveryWhen.

NULL SINGULARITY is an existential, space-horror one-shot compatible with the Dungeon Crawl Classics RPG. NULL SINGULARITY has players play a unique class, "Voidants:" the nameless crew of a primitive colony ship playing a doomed game of hide-and-seek with the dark, cosmological agent of the universe's destruction. NULL SINGULARITY plays in about 4 hours, including character creation, making it an excellent choice for periodic gaming groups and convention events.