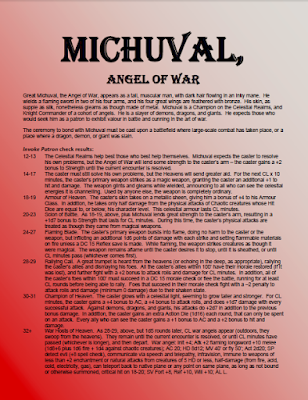 Michuval, Angel of War was written by Daniel J. Bishop. Art is by Gustave Doré. The publisher is Crowking Press.

Disclaimer: I am the writer and publisher.

This is a bit of "virtual swag" that I produced for Bride of Cyclops Con. This is a patron write-up for an angelic being, containing everything except full patron spells.

Great Michuval, the Angel of War, appears as a tall, muscular man, with dark hair flowing in an inky mane. He wields a flaming sword in two of his four arms, and his four great wings are feathered with bronze. His skin, as supple as silk, nonetheless gleams as though made of metal. Michuval is a Champion on the Celestial Realms, and Knight Commander of a cohort of angels. He is a slayer of demons, dragons, and giants. He expects those who would seek him as a patron to exhibit valour in battle and cunning in the art of war.

This is absolutely free, and there is no reason you should not pick it up.