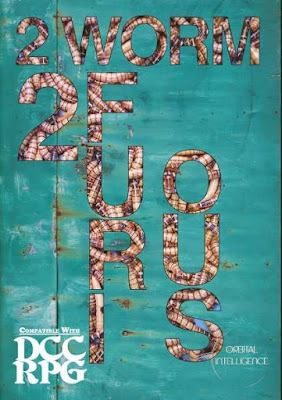 Disclaimer: I backed the successful Kickstarter for this product.

Yes, this is a 0-level funnel adventure. Or, in a way, a toolkit for creating such an adventure, because the judge will be rolling on many tables to determine just what happens. I am not surprised to learn that Doug Kovacs was a playtester, because this certainly reminds me of Country Crawl Classics and Inferno Road. An adventure that passes through the Kovacs test first is going to be interesting. That is not a criticism!

This is not just a 0-level adventure, though. It is described as being usable at any level, and is given a more specific description as being challenging to PCs of up to 5th level. Having read this adventure, I agree with the assessment...and sorrow that I didn't get a chance to be a player before reading it.

If you are a fan of Jack Vance, you know how he could draw a textured society through the creation of a few well-chosen details? Sean Richer has that same gift. And he is able to use it to infuse random tables with enough meat to give players and judges a good understanding of what is going on. At the same time, as with Vance, enough is left unspoken that the reader/judge/players are forced to color in the details themselves. The setting is intriguing enough that exploring it after (or before) the adventure is worthwhile. The participants will have to do some extrapolation and world-building, but the result is potentially spectacular.

Mechanically, the adventure used the dice chain in an interesting way, enabling the judge to openly track how large and how furious the Worm has become. One die tracks its growth, another tracks its rage, and a third tracks how successful attempts to calm it are. The size of these dice affect various rolls, including random events that can happen (in the same way that larger crit dice can result in more dire outcomes). This is a neat mechanic that should work to help ramp up tension at the table. Luckily there are plenty of new peasants to help bolster the legions of the dead....

This adventure also includes a complete patron, the Doombringer Moth, which is also given a full deity write-up (including Canticles).

Thematically, the product could also be tied into The Vile Worm, The Weird Worm-Ways of Saturn, The Vault of Ash, Fate's Fell Hand, Peril on the Purple Planet, The Undulating Corruption, Prison of the Mad Gods, and Temple of the Locust Lord. With a little bit of work, you could have an entire campaign centered around worms of various types!

A deadly funnel (Level 0+) adventure and mini-setting, for 4-6 players, revolving around an ever mutating and evolving moth grub. THE grub has escaped and you have been charged by the God-Queen to bring it back to the hatchery, but this is a funnel after all… so stuff will inevitably go wrong and will likely be fatal.

It’s a tiny worm, that grows and grows and grows, and rampages, and bursts into a colossal Doombringer Moth that’s a Patron, a Deity, and a raging behemoth. It grows and grows, its growth unlocks new abilities and reactions. It rarely acts the same way, and eventually it will rule. WORSHIP IT OR RUN FROM IT, IT DOESN’T MATTER!

A God-Queen, her throne-maidens, the legions of Sky-Knights (on their Worm-Hawks), Stilt-Walkers, and Knights that strike with the fury of a thousand hammers. In addition there’s a couple important NPCs stirring things up and causing problems. Ranging from a veteran sky-knight to turned bartender, to a Jester that loiters in the streets spreading whispers to those that live below.

New Locations, Encounters, Celebrations, Adventure Hooks, Complications, World Changing Effects, Level 0 Occupations, Bestiary Entries (including Worm-Hawks, Stilt-Walkers, and Knightly Orders), Some fancy villagers, A new Deity (or is it a Patron?), Portens, Rune Effects, A map of the Kingdom, Forms to track destruction of the Worm, and a Worm Tracker (for tracking it’s growth, and the Die Chain)