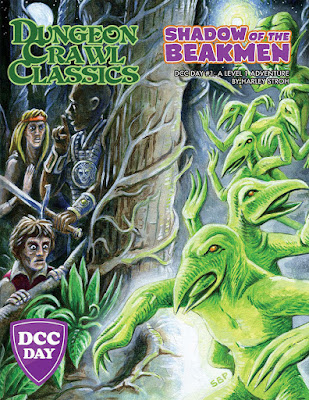 DCC Day #1: Shadow of the Beakmen is a level 1 adventure by Harley Stroh. Art is by Stefan Poag (including cover and cartography), Chris Arneson, Doug Kovacs, William McAusland, Bradley McDevitt, and Chad Sergesketter. The publisher is Goodman Games.

Saturday, 16 May 2020 was the first ever DCC Day, marked with a generous outpouring of swag and stuff from Goodman Games. Like Free RPG Day, DCC Day was intended to generate interest in the hobby - and in this case, our little niche thereof. Then there was a pandemic, and things went a bit strange.

The goal of this adventure was to provide something that could be played with minimum prep for the judge, and which could allow new players to experience the awesomeness that is Dungeon Crawl Classics. It does this very well, but, as written, it is extremely linear. It would easily be run in a 3- to 4-hour convention slot.

As with all Harley Stroh adventures, the right details are present. The final encounter is very flavorful, but misses both enough context for the players to discover who the Master is, and misses the kind of truly cataclysmic ending that some DCC adventures do so well - what happens to the obelisk once the Master is destroyed?

If you intend on incorporating this module into an ongoing campaign, consider the following:

Towering obelisks stab the sky. Monstrous knights with blazing lances prowl the night. Huts burn, and entire villages are taken as slaves to be fed darksome pits. The cries of terror and panic give the horrors a name: the Beakmen have come.

But you are no mere peasant or serf, cowering the in the dark. You and your companions are reavers, with bloodied blades and spells wrenched from the dreams of demons. You stride through chaos while others flee, turning your steps towards the great stone obelisk, the source of the beakmen and their alien magics.

Whether for the cause of justice or merely to acquire these strange blazing weapons for you own, tonight there shall be an accounting: a blazing brand thrust into The Shadow of the Beakmen.

Get the VTT and Token Pack here!