The 998th Conclave of Wizards 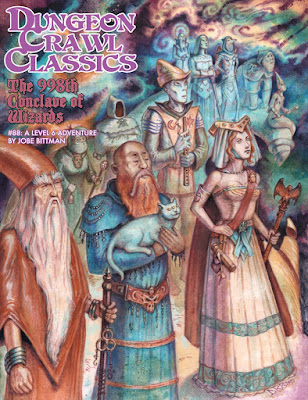 DCC #88, by Jobe Bittman, is a Goodman Games adventure module that can easily double as a campaign sourcebook. In fact, I don’t know how you can use this adventure without gaining a persistent location and a persistent group of important NPCs for your Dungeon Crawl Classics campaign. This adventure also encourages use of DCC #16 Curse of the Emerald Cobra if you have it. DCC #16 was written for 3rd Edition Dungeons & Dragons, but conversions to Dungeon Crawl Classics are pretty simple.

The 998th Conclave of Wizards is not a module intended to be picked up and run on the fly. The prospective judge will want to read the module through, making certain that the material is fully understood. There are also a few areas where the judge is presented with choices about how to run the adventure. Understanding these choices, and having made provisions beforehand for likely eventualities, is valuable…but at 6th level, the choices available to the PCs are such that you will need to be ready to go with the direction they pull the game. This is actually a good thing. If possible, the judge is recommended to foreshadow the adventure by seeding it several weeks before it is actually run.

The heart of the adventure is the alien city of Ciz and the Star Cabal – a group of strange wizards from many different worlds. One or more PC wizards are invited to join the Cabal if they should prove worthy of the honour. Both city and wizards are suitably weird. If they are able to make it so far, the PCs can become involved in the internal politics of the magicians, explore the city, and/or undertake several challenges on the road to joining the Cabal. A four hour game session could easily entail nothing more than wandering around Ciz and getting into trouble.

The module could have used Players Handouts of the various wizards, but the judge can easily make these himself from the images provided.

My current players have leaned heavily away from wizards, until very recently. They have two characters (a cleric and a warrior) who have reached 6th level, but they are pretty far from this adventure to date. Despite that, there is information in the module that can be used immediately – one of the Cabalists hails from Aereth (or whatever your PC’s home world is!), and it is more than possible to seed his name in even a 0-level funnel!

The 998th Conclave of Wizards is great value for the money. The adventure is good, the persistent elements are better, and there are advanced rules for spell duels. This is another critical hit for Goodman Games!