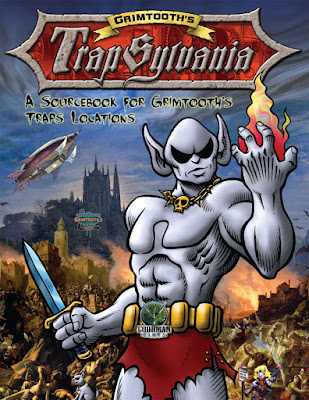 So what is this thing? A tongue-in-cheek setting for Dungeon Crawl Classics adventures, which might be part of a normal campaign setting (although that would seem strange), the basis of a gonzo campaign setting, or a place which might be visited as a result of a planar step gone awry. Each area described contains maps, encounters, adventure hooks, and more. Not surprisingly, there are new traps. There is enough material in this book, if used as a campaign setting, to keep the average group busy for years.

Being Grimtooth's, building up replacement characters will be part of what keeps them busy! The Grimtooth's books hail from the early days of gaming, and have a slant mixing humor with slaughtering PCs, so nothing herein should be considered safe or fair. Nor is it necessarily politically correct by modern standards (the minor succubus found herein, for instance, can force a Will save that, if failed, causes her victim to disrobe and stand helpless for 1d3 turns). If this is what you are looking for, you will not be disappointed.

You get descriptions of a Seaport & Abandoned Village, Grimtina’s Petting Zoo, the Fetid Swamp, Warthog’s School for Wayward Trolls, the Death Maze Testing Center, Grimtooth’s Airship and its Hangar, the Lighthouse & Dragon Grotto, the Forest of Doom, the Hallway of Infinite Corridors, Grimtooth’s Inner Sanctum, and more. You can learn everything you ever wanted to know about Restrooms in Trapsylvania, and why you might wish to avoid them!

Appendix 1: Creatures contains full statistics for 87 entries (by my count), and offers a Snake Poison Table for some of the venomous serpents found in Trapsylvania. Yes, some of these monsters are a bit silly, such as the Kiwi Time Snitcher, "Merv" Griffin, or the Giant Killer Dodo - but a lot of them are surprisingly solid monsters that could be used in any DCC RPG campaign.

Appendix 2: NPCs gives stats for over 20 named beings in the Trapsylvania setting. This includes gods (Shub-Niggurath and Yidhra the Dream Witch Goddess), Grimtooth and his sister Grimtina, and more.

Appendix 3: Items contains over 20 items, and statistics for the minor (Type I) succubus. The author notes that "Many items listed below have magical powers that can significantly impact a campaign. The judge may decide that certain items’ enchantments only function in Trapsylvania." This is probably good advice.

For the first time ever: the Legendary locations of Grimtooth’s Traps revealed! And fully compatible with DCC RPG!

For over 30 years Grimtooth’s numerous Traps books have horrified players and inspired gamemasters with hundreds of dangerous devices, deadly deathtraps and hilarious hijinx! Now Grimtooth (with a little help from kid sister Grimtina) will take you on a personally guided tour of his realm and the central hub of his vast Traps empire.

Run your own Grimtooth campaign or pick and choose locations you can use in your own single location adventures.  Explore Grimtooth’s caverns, visit his Inner Sanctum, escape the Deathmaze Testing Center, attend Warthog’s School for Trolls, take a ride on Grimtooth’s Airship, tour Grimtina’s Petting Zoo or get lost in the Infinite Corridor of Hallways and many more gigantic places of doom. Each of these infamous locations include maps, descriptions, Non-player character details, scenarios, all with in-depth DCC stats and lots of art by Traps artist SS Crompton.

And can you uncover the horrendous secret that lies deep beneath Grimtooth’s caverns and back into his family’s history? It’s a great read and a useful campaign setting all in one book.  What are you waiting for? Get yours today!

Related Products
Posted by ravencrowking at 07:03