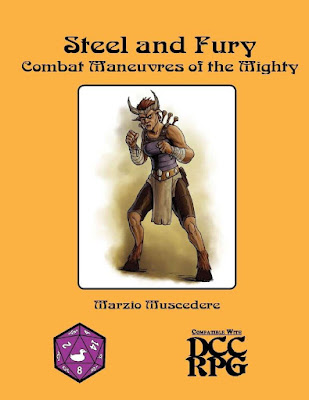 Steel and Fury: Combat Maneuvres of the Mighty, is a sourcebook written by Marzio Muscedere. Art is by Gary Dupuis and Matt Morrow. The publisher is Purple Duck Games.

Disclosure: I have a credit for Feedback in this product.

Frankly, my feedback was largely limited to "This is brilliant!" Steel and Fury is described, rightly, by Endzeitgeist as "perhaps one of THE absolutely required, must-own pdfs you can get for DCC". Of course, it comes in print too.

So, what makes Steel and Fury so awesome?

It is a collection of Mighty Deeds of Arms, which takes into account the weapon being used and sometimes the specific circumstances of the combat. If you wanted your warrior (or dwarf) to perform the kinds of combat actions that occur in Appendix N fiction, this is for you.

In addition, the author introduces the Mighty Critical and the Mighty Fumble. With these systems, there are additional effects when both the Deed Die is at its highest possible value and the Action Die falls within the character's critical range, or when both are natural "1"s. These results are specific to the Deed attempted, and both take the place of the normal Critical or Fumble roll.

All of these results require the judge to adjudicate how applicable they are in a given situation. As the author says, "If the judge doesn’t think a warrior’s punch can shatter a dragon’s jaw...then it can’t. Or if a warrior’s roll results in a severed arm on a creature with no arms then the judge can change it in a manner he sees fit. A judge may also slide the warrior’s deed result up or down on the table dependent upon the situation, strength of opponent or any other contributing factor."

One neat thing about this system is that, as a warrior rises in level, their Deed Die also increases, making a Mighty Critical less likely. But, as the warrior's critical effects are getting better, and the Mighty Critical replaces these when it occurs, over time the warrior still tends to get more awesome effects anyway. The low-level warrior is therefore given a small boost - at the risk of a Mighty Fumble! - but the higher-level warrior is not penalized. As the Deed Die grows, the chances of a Mighty Fumble also go down.

The warrior is the cornerstone of any adventuring party. Rushing to meet insurmountable odds head on, face to face with dangerous enemies and loathsome creatures. Armed with steel and fury, a warrior does the dirty work up close and personal, with grisly effect. Yet in the gaming world, outside of a lucky critical hit, this doesn’t always seem to translate well. With Steel and Fury combat becomes more than simply standing toe to toe and following the pattern of...I go...you go.

Combat becomes dynamic and fluid, with combatants taking advantage of tactics and their surroundings. But most of all combat becomes dangerous and in the hands of a skilled warrior combat becomes downright deadly. Now with the use of Steel and Fury, warriors become even more deadly and rightfully so. Showcasing mastery over the weapons they wield by delivering devastating attacks and using the environment to execute precise and skillful maneuvers.

The following Mighty Deeds of Arms are torn straight from the bloody pages of Appendix N material for use by warriors as they quest for gold and glory. Although watching a cultist burn after kicking him into a raging bonfire is a fun and effective way of using a Mighty Deed, sometimes you just want to shatter your foe’s spine or split someone’s skull to the teeth in a spray of blood and brains. With Steel and Fury your game gains a more cinematic and visceral feel, making the warrior a fun and deadly class to play, not just a meat shield able to absorb damage.