Soul of the Serpent King 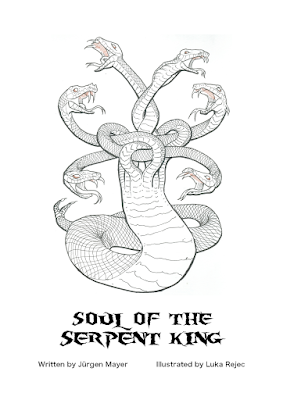 Soul Of the Serpent King is an adventure by Jürgen Mayer. Art is by Luka Rejec. This is a free, unofficial expansion for Edgar Johnson's Blood for the Serpent King, which can also be used as a 2nd level standalone scenario. The publisher is Dead Cyclops Blog.


The author says, "If you're using this with Blood for the Serpent King, note that I have exchanged the lake in area 3-2 with a desert, because my home group just played a certain Harley Stroh adventure that also has a pyramid in an underground lake in a cave, and I wanted some variety. You can just run that area like Edgar intended, or use my sandy adjustments as described in the chapter Striders on the Starless Sands." (Formatting mine and links are mine.)

Included in the adventure is a table for Invoke Serpent King's Favor, although there is not a full patron write up.