Blood for the Serpent King 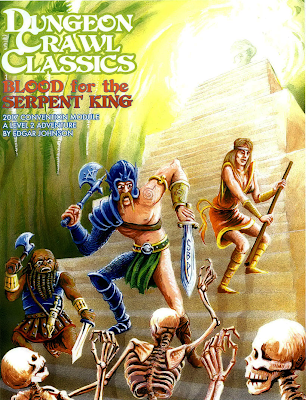 Blood for the Serpent King is a 2nd level adventure written by Edgar Johnson. It is illustrated by Stefan Poag, Fritz Haas, and Cliff Kurowski. Cartography is by Doug Kovacs. The publisher is Goodman Games.

This product was the 2017 Convention Module only available at conventions. I am fairly certain that this product was not available at Gary Con, as I attended that convention and didn't see it for sale...it is possible that I missed it, though! In any event, I was able to get another convention-goer to pick up a copy on my behalf. The back cover indicates that it was available at Origins and Gamehole Con, at the very least.

There is a strong Mesosmerican Aztec/Toltec/Mayan feel to the adventure, which would make it fit very well into a campaign using the Memories of the Toad God series by Cut to the Chase Games. Since that series starts at 3rd level, Blood for the Serpent King may be part of a series of adventures leading into it.

Role-playing games have always been a hodgepodge of mixed cultures, mythologies, and creatures, but writing this entry, it struck me for the first time that cobras are native to Africa, India, and Asia, and don't really fit into Mesoamerica at all. This is unlikely to cause your players any consternation, though, as they try to loot the Crypt of the Emerald Cobra.

Deep in the jungles, amidst the ruins of an unimaginably ancient civilization, dangers lurk: feral tribes and predatory beasts, and darker things that civilized folk prefer to forget. You've heard rumors of the treasure horses of one of those great evils: the legendary serpent-man, Xiuhcoatl. They say that Xiucoatl is worshipped by feral tribes of degenerate serpent-men who call him The Emerald Cobra. Do you dare face their rites of blood and sacrifice?