The Lost City of Barako 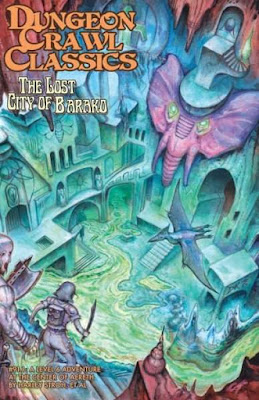 Disclosure: I did some supplemental writing for this product. Specifically, I wrote the Drippling, Head Hunter, and Underbelly Stalker, so if any of your PCs fall to these menaces, you have me to blame.

Although described as a 6th level adventure, this "city at the center of Áereth" is more of a stakes-raising supplement to DCC #91: Journey to the Center of Áereth than anything else. It describes the lost pleasure palace of Barako, complete with tables to describe areas where game play might occur, creatures that might be found there, and information on the extremely creepy and potentially dangerous Akashic Library of Barako.

The product is new enough, and cool enough, that I don't want to spoil any of the surprises the lost city has in store. Suffice it to say that my contributions are far from the best material you will find herein.

That said, I was already considering how the Builders and the Adamantine Mole from The Imperishable Sorceress might fit into Áereth's inner world. If you notice a potential link between the Head Hunters, the No-Men in Lairs of Lost Agharta, and the Builders, I would encourage you to expand upon it!

It strikes me that the lost city is named after a certain former President of the United States. This might be coincidence...after all, I am told that Punjar wasn't named after a collection of money at the center of the gaming table, filled with the ill-gotten loot of numerous groaners. Nonetheless, once you see it, you cannot un-see it.

The pleasure palace of Barako rises above the Bleak Shores atop enormous stone pylons. The palace arches towards the cavernous gloom, lit by a thousand lanterns fueled by the rendered flesh of a thousand lamenting souls. Within the city, hellish figures dart and whirl in the flickering light, prostrating themselves before their Aghartan masters, all to the cacophonic beat of a thousand alien instruments. What adventures will you find here?