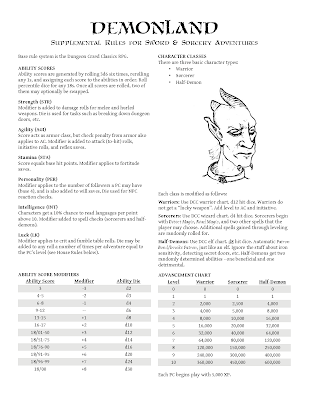 Demonland: Supplemental Rules for Sword & Sorcery Adventures was written by Jeremy Deram. Writing and art are not credited on the pdf. It was made available through the People Them With Monsters blog.

The Demonland supplement was mentioned on Spellburn here.

This post in People Them With Monsters discusses the supplement.

Scattered over Tekumel are innumerable half-buried, half-forgotten ruins. There are fragments dating back to the prehuman ages, when the Ssu and the Hlyss vied with one another for control; there are tunnels of melted rock and steel constructed during the days of man's first glory; there are jumbled heaps destroyed by the cataclysms which rent Tekumel when the planet was cast into outer dimensional darkness; there are catacombs and subterranean labyrinths dating from more recent empires, cities, temples, pyramids, and fortresses dedicated to the lost and unremembered gods of half a hundred kingdoms.