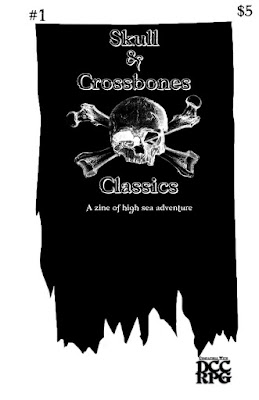 Ever since it was first mentioned on Sanctum Secorum Podcast, I have been looking forward to this product. Those of you familiar with the author's nautical work in Crawl! Fanzine #11 will understand why.

Message in a Bottle: An opening note/introduction from the author/editor.

Character Basics: This section offers a brief discussion of cultural background, firearms, gender, sexuality, languages, and other aspects of a campaign centered around the Golden Age of Piracy.

Specific rules - short, sweet, and to the point - are also supplied for alignment, Armor Class (as sailors rarely wear armor), and skills (seamanship improves with level). This material is easy to understand, does its job, and then gets out of the way. In short, it is elegant.

Star Signs: Essentially birth augurs from DCC, but based on several real-world forms of astrology. The traditional Western, Chinese, and Polynesian zodiacs are presented. These star signs consider things important to sailors, and have both a Weal and a Woe column. Depending upon your Luck modifier, and what is rolled, you might get either or both.

The Jonah Class: Somewhat reworked from the Sanctum Secorum 2018 Free RPG Day Third Party Compendium, the Jonah is an ill-fated sailor, who brings bad luck to the ship and to their shipmates aboard her. Is this a playable class? That is hard to say, not yet having the chance to see it in action. I suspect that it would be fun to play in a one-shot adventure, at least, though a known Jonah would survive an extended campaign no better than suspected Jonahs survived the high seas in real life.

The Devil's Own Luck: The fortunes of a sailor ebb and flow like the tide, but pirates and cutthroats seem especially blessed. Indeed, it is said that they enjoy the "Devil' s Own Luck" - and fortune does seem to favor them in the hardest of times before abandoning them completely in the best of times.

This mechanic offers a modified form of Fleeting Luck, which is a bit more involved, but is also flavorful. You can get it (among other ways) by being unlucky or indulging in the seven deadly sins, but you can loose it by being too lucky or pious. Moreover, you can wager it, betting your own permanent Luck for a temporary boost against the cast of a die.

Sailing Superstitions: Material taken from real-world sailing superstitions, which can be used for inspiration by judge and players alike.

Ill-fortune Mechanic: Low luck, bad luck, curses, blaspheming aboard a ship - there are plenty of ways that a sailor can be down on her luck. Bob Brinkman provides a mechanic (in the form of a d100 table) to determine what happens as a result. This is good stuff, and I would encourage judges to consider similar effects/tables for other genres/environments.

Sea Beggar's Bestiary: DCC game statistics for the barracuda, sea devil (sadly not this one, but that wouldn't have really fit the tone, would it?), sea serpents, and tiger sharks.

Even if you are not setting your adventure in the Golden Age of Piracy, this material would offer flavor and options for games with a nautical element.


1650-1720: The Golden Age of Piracy,
a time where the seas were ruled by those with
the most powerful fleets – but those desperate (or greedy)
enough could live like kings.

You are no hero…

You’re a pirate: a corsair, a buccaneer, a sea-beggar,
a whipcord-tough cutthroat plying the
devil’s trade. You seek gold and glory,
taking it with sword and cannon fire,
awash in the blood of those who would oppose you,
and the tears of those too weak to stop you.

There are treasures to be won upon the seas, and you shall have them.