The Siege of Bonemoore Keep 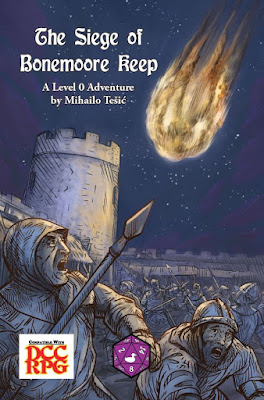 The Siege of Bonemoore Keep is a 0-level funnel adventure by Mihailo Tešić. Art is by Kristen M. Collins, Gary Dupuis, Brett Neufeld (including cartography), Matt Hyzer, and Matt Morrow. The publisher is Purple Duck Games.

Disclaimer: I am given a Special Thanks in this adventure.

What is the funnel supposed to accomplish? It sets the stage for ordinary people becoming extraordinary by throwing them into circumstances where they must rise to greatness or be trampled by the jeweled sandals of history. It provides them with a chance to determine class, at least in part, naturally through the events of play. And it sets the stage for what follows, both in terms of what the PCs themselves have become, and with inherent hooks for the campaign world.

The Siege of Bonemoore Keep succeeds on all of these counts. It also offers rewards beyond XP and loot - your actions may, for instance, result in a stat bonus. Characters are crafted by their actions.

(Some theory on funnel design can be found here.)

Mihailo Tešić's funnel has some definite High Fantasy elements. In Appendix N terms, L. Sprauge de Camp, Lin Carter, or Michael Moorcock might come to mind. The judge is given the outline of a villain that may plague the campaign milieu over the course of many sessions, or even years of play - assembling whatever is needed to defeat him might prove a useful hook for many an adventure to come. The villain himself seems like something one would expect to encounter in an Edgar Rice Burroughs Barsoom novel, or one of Leigh Brackett's tales of Eric John Stark.

Although the funnel takes place in one location - the besieged Bonemoore Keep - there are enough areas within that location to make play interesting and to give players plenty of choices. What they choose, and whether or not they succeed, will have definite repercussions in the campaign world.

The Thrallmaster’s hordes come… are you ready for the Siege of Bonemoore?

The call to arms does not always come to warriors, and fate has found your humble party in Bonemoore Keep when the ghastly armies of the Thrallmaster attack. Faced with demonic fury without and mysterious sorcery within the Keep, will you survive to carry the day and start a career in intrepid Dungeon Crawling?

The Siege of Bonemoore Keep is a new 0-level funnel for the Dungeon Crawl Classics RPG game system written by Mihailo Tesic and published by Purple Duck Games. In this 3-part challenging adventure, the situation is desperate, and the players must do what they can to repulse an oncoming threat of fanatical enemies, without much in the way of resources or training. As the harrowing story continues, they must enter the inner Keep and seek the Lord Farwall, whose dire inheritance can save the castle- and the world! Battlefields, dungeons, puzzles and sinister laboratories await those who survive – The Siege of Bonemoore Keep!