Enchiridion of the Computarchs (Preview) 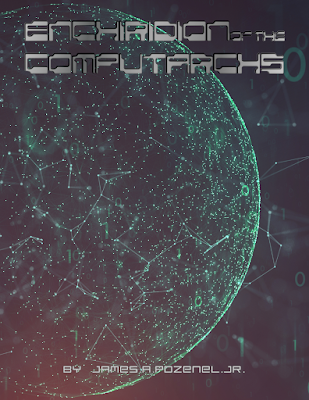 Enchiridion of the Computarchs (Preview) was written by James A. Pozenel, Jr.. Art is by David Fisher, Matt Sutton, and K.J. O'Brien. The publisher is Horseshark Games.

This is a supplement for Dungeon Crawl Classics and Mutant Crawl Classics games using technological "magic". This includes, but is not limited to, Cyber Sprawl Classics, Crawljammer, Umerica, Terror of the Stratosfiend, and Star Crawl Classics. Even baseline DCC gets its sci fi peanut butter into the chocolate of fantasy gaming,so this product might have wide use.

According to the DriveThruRPG preview, Most this content in this preview has been released in Gongfarmers Almanac 2019 & 2020. This is a free preview of the soon to be released full version of "Enchiridion of the Computarchs". The full version will have 38 programs, 1st - 5th level, generation tables and as much art as possible. The full mechanics are presented here to allow the DIY judge to leverage what he likes without buying the full version.

Technological Mishaps: Faults, Bugs, and Critical Errors are the "corruption" that occurs when you mess up program activation.

Burndown: The analog of spellburn for programs. Includes a d24 table.

Developed Programs: If you've been playing MCC, and wondering what your shaman can do (other than invoke her Patron AI), this section is for you. Not only does it contain the necessary information for running programs, but it supplies a table for Shamans indicating their Max Wetware Level and number of Wetware (programs) Known. There is a Program List indicating those programs which will be part of the full book.

The cabalistic and powerful Computarchs built the WorldNet, governed its growth, established its laws and conventions, and seemingly retired from their world altering creation. They left their tools and programs scattered throughout the vast network. Some have been found by seekers such as yourself and have been passed down from generation to generation. Collectively these pieces of software are known as Enchiridion of the Computarchs.

The Enchiridion of the Computarchs preview is available as a Pay What You Want product.