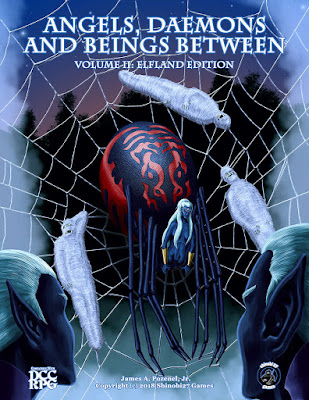 Disclosure: I wrote the forward and a backer patron for this product, and was a patron of the successful Kickstarter campaign. The author also kindly mentions my blog in his introduction, and says "While all the research broadened my horizons, it was some of Daniel Bishop’s words in a blog post about patrons that ended up informing my work the most."

This is a massive book, containing 13 full patrons (including three backer patrons), four demi-patrons, and more. Let's look inside!

Foreword: Standard fare, which I wrote.

Preface: More standard fare, but which tells you how the author chose to approach him material.

Introduction: Here we get into the first real meat of the book, with discussions of the Faerie Court, Faerie Mounds, and the relationship between Elves, Patrons and Religion. Anyone familiar with folklore, or the more folklore-derived elf-types in Appendix N literature, will be more delighted than surprised by this material.

Patrons: The book then jumps into the 10 full patrons James Pozenel devised for the book. They are:


Lumgolit has the distinction of being mentioned (although not by name) in the core rulebook: "the demon queen of the spider pits tires of her servants being misused by mortals and takes notice of the caster, who finds himself beset by arachnid opponents at all turns (judge’s discretion) for the next 1d7+1 days – these spiders, both mundane and demonic, attack exclusively the caster and clearly seek to punish him" (page 196). The dark elves are mentioned on pages 56 and 320.

Demi-Patrons: Demi-patrons were first described in CE 5: Silent Nightfall, and later appeared in Angels, Daemons, & Beings Between, having been further (and independently) developed by Paul Wolfe. These are beings, not as powerful as full patrons, who may nonetheless aid spellcasters. This volume contains four.

Appendix A: Magic Item Generator: This appendix allows the judge to create unique magic items easily, and with interesting results.

Appendix B: Elven Mercurial Magic: This is not a full set of mercurial tables, but offers replacements for the "No change. The spell manifests as standard." results from 41-60 in the core rulebook. It differentiates results in many cases between normal and dark elves.

"You are a tiny, mischievous sprite. The big people call you the Fair Folk, the Gentry, Little People or faeries. You live in mounds or great hollowed trees in secluded, sacred forests and hillsides. You live to torment or treat the larger races if they stumble into your territory. Little children dream of finding you but those who do may regret it. Sometimes kind and helpful, at other times known to play mischief (or worse) upon mortals, their actions, taboos, and customs can seem inscrutable and confusing."

Goodman Games published The Complete Guide to Fey for the 3rd Edition of Dungeons & Dragons. That work offers some insight into creating and running faerie creatures that this class does not, but this class reads like a distillation of that work into Dungeon Crawl Classics sensibilities. I think that the author did a very good job here.

Appendix F: Backer Patrons: Three backer patrons are included in this volume. They are:

As with the first volume, there is permission to use these patrons in other products included in the Usage and License Information section.

The fey are an ancient race of elves, faerie and other mischievous beings, their origins lost in antiquity. Ever questing for the esoteric secrets of magic and of the universe itself, elves have long sought to connect with the architects of their kind. Serving and bargaining with fey patrons of old is a means to this end.

Angels, Daemons and Beings Between Volume 2: Elfland Edition unleashes the hidden patrons of Elfland. From fey barbarians and vagabond thieves to vile demons and alien vegetation, this tome shines light on 14 [sic] new patrons of distinct fey character. With accompanying spells, spellburn, patron taints and the rituals required to commune with these patrons. This volume is a must for your campaign’s elves… and wizards, of course!