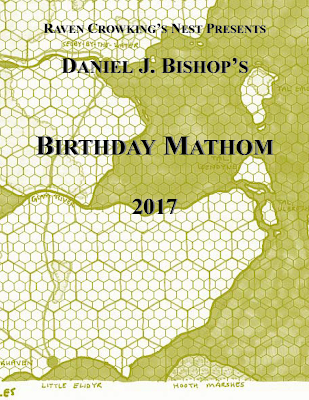 The post offering this item, and giving the requirements for receiving it, appeared on 4 July 2017. Only two people received a mathom from me that year.

Faerie Encounters: This is an article, which first appeared in Dragon Roots Magazine, issue #3. The original material was written for 3rd Edition Dungeons & Dragons, and much of the d20 System references have been removed to make the article more useful to the aspiring Dungeon Crawl Classics judge.

Addictive Substances: Describes three substances your PCs may encounter, which are addictive. Faerie Fruits are as described in "The Goblin Market" by Christina Rossetti. The other two items are ones that PCs (or their foes) may seek out, despite their drawbacks.

Leyworms grant the user increased ability to connect to ley lines, and thus a bonus to spell checks, in exchange for an increased chance of spell failure. Zurgâsh, or “blue fire” is an addicive fungal substance manufactured by orcs. It trades intelligence and speech for increased prowess - effectively, it gives a reason why some orcs seem to violate common sense by not sounding the alarm as soon as an adventuring party appears.

Those familiar with The Silmarillion by J.R.R. Tolkien may recognize that "zurgâsh" is actually partly built of the Black Speech of Mordor, wherein "gâsh" means "fire".

Evensong: This is a poem, which was first published in the now-defunct Fables online. You can still find it here.

This product is no longer available, although, as indicated above, some materials within are still available in one format or another.