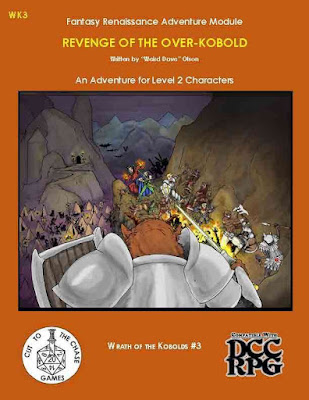 WK3 Revenge of the Over-Kobold is a 2nd level adventure by “Weird Dave” Olson, with art by Aaron Ostman and cartography by Glynn Seal. The publisher is Cut to the Chase Games.

This is the third and final adventure in the Wrath of the Kobolds series. It makes good use of the PCs' earlier adventures (if they played through the series) to establish characters and locations. Like other offerings from Cut to the Chase Games, the Weird Dave's Notebook asides are highlights for me, as I always enjoy reading (or hearing) about how other GMs run their games.

Revenge of the Over-Kobold suffers from having been written for multiple systems. The monsters are not mysterious (with one exception), although the author does include appendixes to help make individual kobolds stand out. The treasure is based on a Dungeons & Dragons/Pathfinder model - a 1 gp bounty on kobold ears is a bit high for Dungeon Crawl Classics! - but this is easily remedied by the aspiring judge. It is likewise unfortunate that some items, especially the Bane of Kobolds, are not given the full DCC treatment!

As with other adventures in this series, I encourage the judge to read the material thoroughly, making changes as she goes. Although the monsters will be largely familiar to your players, that is not necessarily a problem. Certainly, the series as a whole lays a good groundwork for a larger campaign, which can include all the DCC weirdness that you like! I have taken a look at XP requirements in DCC, and imagine that you could use Wrath of the Kobolds exclusively to reach Level 2, and possibly Level 3, but thereafter you won't be able to rely on any single series of adventures to generate a campaign. This is not a bad thing; weaving storylines is generally better than a linear series, and as PCs gain levels, the judge is perforce required to add additional materials to enable this sort of play. A background of "normal" creatures makes the exceptional beings stand out!

The adventure itself starts with a battle against a large array of kobold forces, which is a nice change of pace. This is similar to Crypt of Bones, and uses a similar mechanic to determine how successful the PCs are.

The adventure also assumes (but does not require) that the PCs have become part of the life of the town of Ormkirk and the surrounding area, due to their actions in previous adventures of the series. Relationships with NPCs - both friendly and not - are worth cultivating!

The middle third of the adventure requires that the PCs follow a series of clues to find the Over-Kobold. Although this is linear in terms of the order of clues, how the players choose to resolve the conflicts is not prescripted. The author relies on rolls in one instance where I think the judge is better off using role-playing (and perhaps a single roll) rather than what amounts to a 4th Edition skill challenge. Again, this is easily adjusted in play. The author advises the judge that failure is an option, but also provides the means to ameliorate failure if desired. Enough information is provided that, if the judge chooses not to ameliorate failure, she could extrapolate the events of the Over-Kobold's armies sweeping through the region...the option that I would personally go for, even though it is not specifically called out.

This adventure relies less on the Dungeons & Dragons-based enmity between gnomes and kobolds, although if a compiled edition ever comes out, I would still hope to see a gnome class included. Until such a time, I still recommend using Yves Larochelle's gnome class in Crawl Fanzine #6.

The final portion of the adventure requires stealth and wits as well as combat prowess, as the PCs invade the sanctum of the Over-Kobold. Imagine a combining the giants' encampment from Colossus, Arise! with The Steading of the Hill Giant Chief, except with kobolds, and you'll have some idea of what this part of the adventure is like.

The ground rumbles beneath the feet of hundreds of marching kobolds. A great force has been assembled by a mysterious warlord known as the Over-Kobold, and no power can stop him—or so he believes. Only a brave band of adventurers are positioned to strike back against the Over-Kobold’s march of revenge against the world.