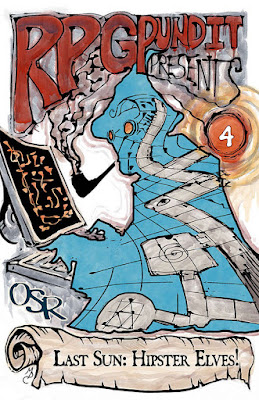 Hipster Elves are the dominant elven culture on the Northern Continent, living in domes that they no longer know how to use or maintain. "In the best of cases, only about 7% of all Hipster Elves bother to learn anything these days. Those who do tend to know very little. The other 93% have no idea about the outside world, though they are sure it is just like they imagine from the safe space of their bubble-shaped dome. This makes the Hipster Elves inevitably doomed."

This product includes a basic description of Hipster Elves, a description of Hipster Elf domes (including the information you need to determine if they are inhabited, and, if so, by what), and a Hipster Elf occupation table. Hipster Elves can have occupations like "Activist: Pointless", armed with a "Staple-Gun (1d2)" and carrying "1d100 leaflets about a cause no one actually opposes" or a "Vegan Barbecue Cook" armed with a "Knife (1d3)" and carrying "inedible garbage he claims tastes just like meat".

Descriptions of some of the more unusual Hipster Elf occupations are also given. For instance, a Professional Allergic is described as: "These Elves have no actual allergies, but feign having several life-threatening ones that limit what they can eat or how much they can work. They often worry about the presence of gluten in foods that have no gluten by definition."

Clearly, RPGPundit's sociopolitical views color his descriptions in Hipster Elves, but whether this is a good thing or a bad thing must be determined by the individual reader. So long as you don't take yourself too seriously, you might find some useful gaming material here.

From the annals of the RPGPundit's (in)famous Last Sun gonzo fantasy campaign, this supplement details the most common surviving species of Elves on the surface world: Hipster Elves. Discover the secrets of this decadent and largely useless people's high-tech domes, their culture, and a hilarious table of over 50 new 0-level professions for Hipster Elf characters.