The Ruins of Ramat 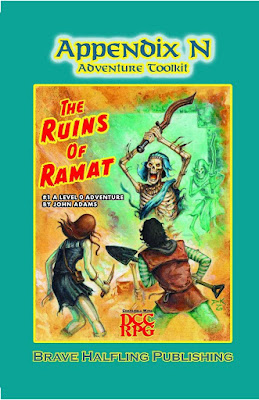 This product came about as part of a successful Kickstarter campaign, which has unfortunately been less successful in delivering the goods. I know that this has been, at least in part, due to personal tragedy, and I know that Brave Halfling has made efforts to catch up on the backlog. Eventually, Brave Halfling moved to a print-on-demand format, although this adventure is now currently available only in pdf as far as I can tell.

Nonetheless, I note that, at the time of this writing, there was an update on the Kickstarter on February 24, 2018, even though there are people still waiting for shipments (as is clear in the comments). Personally, I like John Adams, and my dealings with him have always been completely satisfactory. While I understand the frustrations this, and other, Kickstarters have caused, I do not believe that there is intended malfeasance. But I do understand the frustration.

There is also a Swords & Wizardry and a Castles & Crusades version of this adventure, which might be of some interest to judges seeking examples of conversions.

I discussed The Ruins of Ramat briefly in this blog post:

The Ruins of Ramat (Brave Halfling):  As we get to the end of my list, I would like to emphasize again that I am putting great material in order, not ordering from great to mediocre.  The Ruins of Ramat has a lot going for it, but there were a few things that I thought kept it from a higher ranking.  First, the descriptions did not always match the visual aids.  Second, the khopesh swords have no damage listed.  Finally, I dislike the way D&D has handled confusion, and one encounter in this module relies upon the same handling.  That said, when I ran this module, a lot of fun was had.  The confusion bit was the only really questionable bit, and it can be fixed by treating the confusion descriptively, allowing the players to decide not to make attacks at shadows, and then allowing those shadows to attack them!  After than, any PC who attacks a shadow has an equal chance to target a friendly or enemy figure.

More information on Ramat, "a radiant god of righteousness and light [that] was worshipped in a distant land" would not be amiss.

It is mid-spring, the time when the land’s rulers and their men-at-arms go to war with their neighbors. Nearly every able person is already involved in such conflicts, or helping the remaining militia protect the local village.

A little girl comes running and crying into the center of the village. When questioned, she sobs that she and her dog were playing just outside of town, by Rose Hill, when a giant, clawed creature came up out of the ground and took her dog. The girl is completely terrified and her dog, which never normally leaves her side, is nowhere to be seen. You and your companions volunteer to look into the matter.