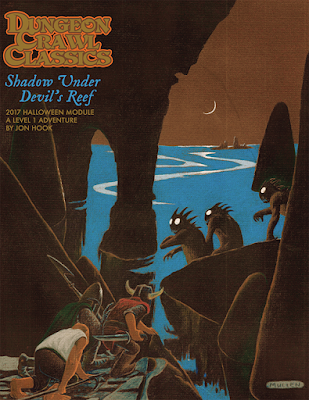 We all knew that, sooner or later, Goodman Games was going to release a module closely inspired by the writing of H.P. Lovecraft, and Halloween of 2017 was the time to do it. Jon Hook, who supplied statistics for 22 Lovercraftian Monsters for Dungeon Crawl Classics in the Goodman Games Gen Con 2017 Program Book was clearly the person to do it. His adventure in that same guide, The Thing That Should Not Be, is also solidly Lovecraftian, and would be a good follow up adventure to this one when the PCs reach 3rd level.

As the cover painting makes clear, Deep Ones are involved...but they are not all that is involved. Structurally, because both adventures pay homage to The Shadow over Innsmouth, there are similarities to The Portsmouth Mermaid. These do not, in any way, hurt either adventure, and it would be perfectly feasible to run both in the same campaign. Likewise, although this was released as a Halloween module, there is no reason to wait until then to play it. It is a good adventure with solid Cthulhu mythos elements.

The perfect October release! A raging storm has made the waters around Devil’s Reef impossible to navigate safely. The noble galleon, The Royal Dawn, has run aground and Princess Kaeko from faraway Fu-Lamia is now missing! Untold riches and glory await those who successfully find the princess and safely deliver her to Black Sand Port. As the greedy and ambitious adventurers set out to find the princess, their thoughts linger on the few Royal Dawn survivors that washed up on the beach with bodies that were corrupted by strange frog-like mutations. What kind of evil awaits the adventurers on that forbidden island?