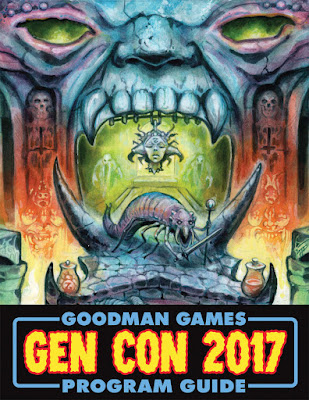 The Goodman Games Gen Con 2017 Program Guide is described on RPG Now as being written and illustrated by Goodman Games, and is published by Goodman Games as well. Doug Kovacs is the cover artist. Other attributions are listed on the Table of Contents, and will be reproduced below. As always with this type of product, I will be primarily focused on materials relevant to the Dungeon Crawl Classics family of games.

Disclosure: I appear in the Odyssey Con picture and one of the Gary Con pictures in the Con and Event Recap.

2016-2017 Mailing Labels: The Goodman Games mailing label art, by Stefan Poag and Brad McDevitt, is reproduced for your enjoyment.

The year is 2202, and dinosaurs have been discovered on the planet Cretasus. Humanity has continued to carry their conflicts to the stars in a timeline where the American civil war of 19th-century Earth ended in a stalemate instead of a Union victory. Now two factions – the Federal Union of Planets and the Confederate States of America – are rushing to claim this new world. Perhaps you are one of the thousands of human settlers flocking to Cretasus seeking wealth and glory. Perhaps you are one of the intelligent dinosaur species now caught in the conflict with these strange new beings. Or perhaps you are simply a misplaced adventuring party from another universe struggling to survive this new world long enough to return home!

Broncosaurus Rex was an innovative setting when it came out, and this conversion gives one more than enough information to exploit Cretasus for all it's worth. Five classes are included - four for velociraptors and one for humans who feel an "innate connection to the laws of nature". Velociraptors can be warriors, tacticians, shamans, or exiles. Four velociraptor-specific deeds are provided.

Through careful study and ritual, velociraptor shamans can attempt to bond with a specific species of dinosaur, enabling them to draw upon that dinosaur’s strengths. Known as Ways, three have been identified below, the Way of the Tyrannosaur, the Way of the Triceratops, and the Way of the Pteranodon.

These Ways are treated exactly as are other patrons in Dungeon Crawl Classics.

There is a discussion of Broncosaurus Rex Tech Levels, adjusted to be fully compatible with Mutant Crawl Classics, including sample weapons and equipment. Ten dinosaurs (or prehistoric reptilian creatures, in the case of pteranodons) are provided.

The Return of Scravis: This is a 2nd level adventure by Marc Bruner, with art by Tim Burgard, William McAusland, and Thomas Yeates, and cartographer by Steve Crompton. The adventure takes place on Cretasus, but suggestions are provided for taking your normal Dungeon Crawl Classics PCs into the adventure (and then either letting them return to their own world or not, depending).

For generations, the L’dena tribe of velociraptors have lived and hunted in the East Valley, one of the twenty great valleys that divide the surface of Cretasus into isolated continent-sized ecosystems. High-minded and social, the L’dena believe themselves to be the true inheritors of an ancient pact made between carnivores and their prey, acting as wardens of the natural balance that allows dinosaurs to flourish on the planet.

Now disturbing signs foretoken a disruption to this natural order. Tribal hunting parties report entire dinosaur herds fleeing their ancestral hunting grounds and having to travel farther to find what meager game remain. Tremors, once rare in the valley, now shake the earth with increasing frequency. And from the sacred lands where the god of the raptors is said to make his home, smoke once again rises from ancient mountains and whispers come of the return of a deadly predator long thought extinct.

The Thing That Should Not Be: This is a 3rd level adventure by Jon Hook, with art by Doug Kovacs (who also did the cartography), Jesse Mohn, and Chad Sergesketter.

The Black Moss Woods are avoided at all costs by the local villagers, for the horrors within defy description and are certain doom for those foolish enough, (or unfortunate enough), to enter. The characters have entered the Black Moss Woods because they recently discovered evidence of a cult to Nyogtha, a putrid god of chaos and defilement. So vile is the worship of Nyogtha, that the characters suspect that the cult could introduce a new age of darkness, unless they are stopped.

Sisters of the Moon Furnace: This is a 0-level adventure by Marc Bishop (who also did the cartography). Art is by Tom Galambos and Cliff Kurowski. An Editor's Note indicates that this adventure was a runner-up in the 2016 Rodneys Design Award.

The PCs awaken one starry night atop the highest point of a tower plateau, unaware of how they arrived. The cliff walls are sheer on every side, surrounded beneath by a cloud-like haze that obscures the earth below. As their journey begins, the players will have little clue about the cosmic game they have been sequestered for, but along the way, the pieces of the puzzle come together regarding Aphelion, the Three Sisters, and the purpose of the Moon Furnace.

A Visual History of the Band: Images of the Band by Doug Kovacs, from their first appearance in the core book to Moon-Slaves of the Cannibal Kingdom.

Goodman Games Official Gen Con 2017 Event Grid: Useful to figure out where and when to game at the convention; useful only as a historical document now.

Real Life Adventures: The Goodman Games 2017 Creative Retreat: Joseph Goodman writes: In early 2017, I took the Goodman Games creative crew on a “creative retreat” in northern California. In one very long week, we visited a host of unusual sites, all of which had clear application to inspiring creative writing. The goal was to break out of our comfort zones and find real-world locations that can better infuse our creative works. We were simulating fantasy writing through real-world adventures, or at least as close as we could come to that.

Road Crew Flyer Design Contest 2016: I wasn't even aware that this was happening. Cool designs to inspire your own gaming flyers! Attributed to the Goodman Games Community.

Con and Event Recap: Also attributed to the Goodman Games Community, photos and other images (including a design for Fleeting Luck tokens!) from the Goodman Games World Tour, starting at Gen Con 2016, and ending at Gary Con 2017.