Myassari, Patron of Birth and Decay 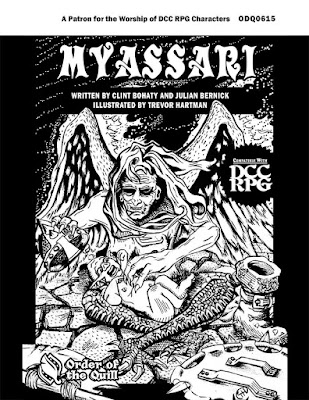 Myassari: The Patron of Birth and Decay was written by Clint Bohaty and Julian Bernick, with art by Trevor Hartman. The publisher is Order of the Quill.

This is a complete patron writeup for Myassari, the stenographer of birth and decay, the silent observer, and the deity of midwifery and time, including three patron spells, patron taint, invoke patron results, and spellburn table.

When Myassari must converse with material beings, she takes on the appearance of a weatherworn harpy, whose heated feathers dance and flicker like flame driven by a bellows.  Those who wish to form a bond with Myassari must first be catalogued by the scrupulous patron.  After crying out her name upon a blazing pyre, the PC must survive the torment of a ceaseless cycle of life and death within her vacant dimension for a full week.  Having been beaten and tempered on the anvil of time, PCs bound to Myassari are requested to make offerings of rare and valuable materials to be studied by their patron, until she's documented the phases of each object and being within the multidimensional universe!

This patron is first mentioned in Cast Tower of the Blood Moon Rises! Considering that this patron is offered as a "Pay What You Want" pdf, there is no reason for anyone involved with the Dungeon Crawl Classics to not have gotten this!

THEN KISS HER TALONS AND BEG FOR MYASSARI’S MERCY!