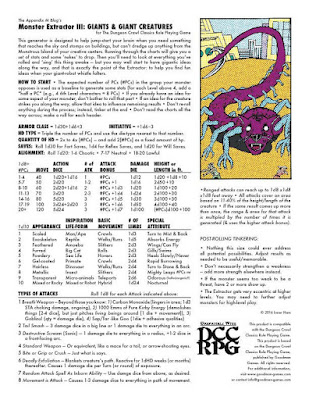 As with the Monster Extractor I and Monster Extractor II, this product is, literally, two pages long. The first page is the extractor proper, and the second page is a worksheet to record your creations. This Extractor is focused on creatures considerably larger than your average orc. The following creature was made using the Extractor to face a 6th level party with 4 PCs:

It was randomly determined that this is creature is 75' tall or long, apearing as a big cat with an exoskeleton, that walks or runs on 3 limbs and can make mighty leaps up to 8 miles. It has the attack forms of Tail Smash (3 damage dice in a big line or 1 damage die to everything in an arc) and Breath Weapon [Sap/Tar -like Goo (1die + adhesive qualities)] with a 60' range.

On the world of Hubris, in the Frozen Wastes "the gargantuan city palace and grand necropolis of the Dread Lord Glish Mal lies covered in massive snow drifts and forgotten with time." The Lion of the Necropolis is a hidden guardian, mounded beneath the snow and ice, and waiting patiently for thousands of years to prevent the "horrific undead army and unimaginably powerful sorcery" of Lord Glish Mal from returning.

The Lion of the Necropolis appears to be an enormous lion, fully 75' long, not including its tail. Its exterior is covered in a stone exoskeleton that makes it appear like a statue when not moving. although its hind legs are fused into a single member, it can make prodigious leaps of up to 8 miles and can move at extraordinary speed.

The enormous cat's tail reaches a full 60' behind it. It can strike at three targets within a this range in a line, doing 3d20 damage to each target, or sweep all targets in a 40' arc for 1d20 damage. Further, it can spit icy water up to 60' away, doing 1d24 damage and instantly freezing targets in place (DC 20 Reflex prevents freezing). If the target misses the save by 5 or more, it cannot get itself free. Otherwise, a DC 15 Strength check may be attempted each round to do so. A creature frozen in this manner takes 1d5 damage each round it fails a DC 15 Fort save.

In ancient times, the Lion of the Necropolis was immune to the powers of all un-dead, and could transform magical energies used against it to its own benefit. These powers are no more, and their failure may one day release again the might of Lord Glish Mal upon a cowering world.

Monster Extractor III is designed to help jump-start your brain when you need something that reaches the sky and stomps on buildings, but can’t dredge up anything from the Monstrous Island of your creative centers.

A single page of charts to aid in finding that new monster, and a page of 4-up monster "character sheets" for recording your creations.

NOTE: This product has no actual relationship to Hubris. I just used that as a demonstration.