Monster Extractor I, for DCC 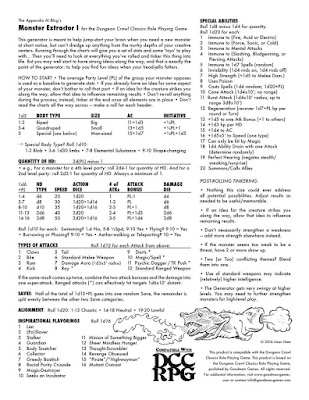 Monster Extractor I for the Dungeon Crawl Classics Role Playing Game was created and illustrated by bygrinstow. The publisher is Inner Ham.

This product is, literally, two pages long. The first page is the extractor proper, and the second page is a worksheet to record your creations. Unlike The Monster Alphabet, the Monster Extractor is designed to help you create a usable, fully statted-out creature with minimum fuss. Roll a few dice, and you have a completely new monster.

The following creature was made using the Extractor to face a 1st level party:

It was randomly determined that this is a big biped of some elemental substance with a "pirate"/"highwayman" flavor. So there is some work to be done. Since it can fly and phase through solid objects, I will say that it is made of elemental air (or is gaseous). Since it is pirate themed, I will say that its weapon resembles a pistol, but is also gaseous (hence the low damage).

The phantom pirates of Yotz can alter their molecular form to be able to pass though solid objects as though they were ethereal, or to hold objects (such as the treasure they plunder or the rigging of the ships they steer). If defeated, their gaseous pistols cease to exist (unless the judge's campaign uses firearms normally, in which case they manifest in the world as solid weapons). Because they are somewhat solid when fighting, their weapons can harm others, and they take half damage from mundane, non-magical weapons. These pirates are fully 7' tall each. if using weapons apart from their gaseous pistols, those weapons do half normal damage (i.e., a gaseous longsword would do 1d4 instead of 1d8).

The Monster Extractor is meant to help jump-start your brain when you need a new monster, but can't dredge up anything from the murky depths of your creative centers.

A single page of charts to aid in finding that new monster, and a page of monster "character sheets" for recording your creations.