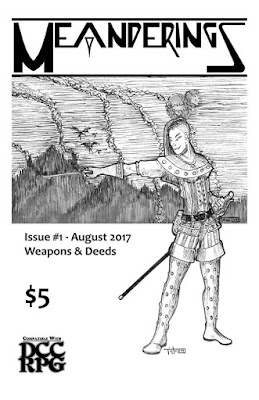 Meanderings #1 was written by R.S. Tilton, with art by Mario Torres and R.S. Tilton. The publisher is Epic Meanderings.

This issue is specifically "about Weapons & Deeds".

The Dungeon Crawl Classics Weapons Project: Expanding the Weapon Tables: This article expands weapon-specific deeds to those weapons not specifically covered by the core rulebook. The author writes:

"A Special mention of Marzio Muscedere and the Steel and Fury book produced by Purple Duck Games for his excellent idea of Deed fumbles and criticals. If you can only afford ONE 3rd party supplement, I heartily recommend Steel and Fury! Thanks for letting me run with that idea Marzio."

The article is intended to be a "living document", updated from time to time. How this will work with the zine format, I am uncertain...it could mean follow-up articles. It could mean updates to the pdf version of the zine.

Lesser Deeds of Daring: R.S. Tilton wrote an article in Crawl! #12 that allows non-warriors and non-dwarves to burn Luck in order to access Deeds. Herein, he crafts a system wherein a character can reduce his attack bonuses to gain a Deed Die. In this particular case, the Deed Die does not add to damage.

Lucky Strikes of Derring-do: This article is revised and expanded from the aforementioned article in Crawl! #12. This includes "Dastardly Deeds of Deceit" suitable for thieves and less-honorable warriors. These are Hamstring ("You strike for the tendons and muscles of the leg, to hamstring your opponent.") and Hindering Strike, or Strap Cutter ("You strike at your opponent with the intent of hindering their ability to attack and defend to the best of their ability by either cutting straps on armor or accessories, maybe tripping them with their own scabbard.")

Bastion Campaign Setting Part 1: This is a three page primer (apparently initially intended to be two pages) of the author's Dungeon Crawl Classics campaign setting. Included are an alternate halfling (the Git), as well as minor variations on the Elf and Dwarf. Also included is an Ogre class.

Ahsra Bloodlorne: Finally, the back inside cover of the zine is the iconic character from the cover, with full DCC statistics.

Get It Here!
Posted by ravencrowking at 06:20