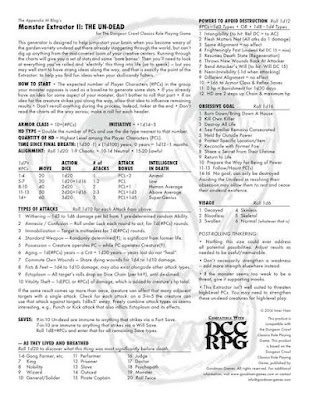 Monster Extractor II: The Un-Dead for the Dungeon Crawl Classics Role Playing Game was created and illustrated by bygrinstow. The publisher is Inner Ham.

As with the Monster Extractor I, this product is, literally, two pages long. The first page is the extractor proper, and the second page is a worksheet to record your creations. This Extractor is focused on un-dead creatures, which are a staple not only of Appendix N fiction, but also of role-playing games. The following creature was made using the Extractor to face a 3rd level party with 4 PCs:

It was randomly determined that this is creature died 352 years ago, and which has above average intelligence. It was a normal peasant (gong farmer, etc.) that is obsessivelly seeking to see its familiar remains consecrated. It appears as it did in life.

Tarquin Fossor is the revenenant of a gravedigger who dies three and a half centuries ago in Ur-Hadad. He appears just as he did in life - a gaunt but muscular man dressed in soiled antique clothes and carrying an old shovel.

The misfortunate gravedigger fell an early victim to the Yellow Death, and when his wife and three children followed him, their bodies were tossed into a mass grave beyond Ur-Hadad's walls. The gravedigger's rage at this injustice consumed him in death, animating his body and defining his very existence. Now, each night, he seeks the remains of his family - not only their physical remains, but also the jewelry his wife once wore - to see that they are buried properly. Until this is done, or his un-dead form is destroyed, he cannot rest.

So powerful is the un-dead gravedigger's that anyone struck by his shovel must succeed in a Will save (DC 14) or join him in his quest for the next 1d12 hours. Worse, if Tarquin Fossor's body is destroyed during this time, a second Will save (DC 14) must be made by each affected creature (determine order randomly), or the gravedigger's spirit inhabits the body, driving it to seek its family's remains each night....potentially preventing the benefits of rest. A successful exorcise spell may drive the spirit out, or divine intervention, but little else short of finding the spirit's wife and children, and seeing that they are properly buried.

Monster Extractor II is designed to help jump-start your brain when you become weary of the garden-variety un-dead out there already staggering through the world, but can’t dig up anything from the mist-covered loam of your creative centers.

A single page of charts to aid in finding that new un-dead monster, and a page of monster "character sheets" for recording your creations.

NOTE: This product has no actual relationship to Ur-Hadad. I just used that as a demonstration.