Moon-Slaves of the Cannibal Kingdom 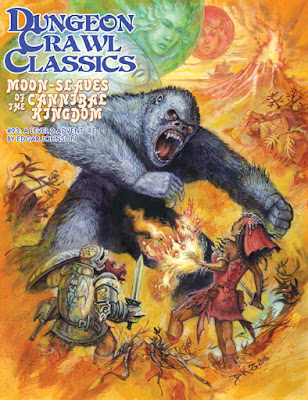 DCC #93: Moon-Slaves of the Cannibal Kingdom is a 2nd level adventure by Edgar Johnson. Art is by Jim Holloway, Doug Kovacs (also cover and cartography), William McAusland, and Stefan Poag. The publisher is Goodman Games.

I thought that I was writing a love letter to Abraham Merritt when I penned Through the Dragonwall; Edgar Johnson has gone me one further. Well, if King Kong or Mighty Joe Young were also created by Abraham Merritt.

The general set-up of the adventure is that the PCs arrive on the Vainglorious Rat (a great name for a ship that would, probably, mean my players avoided it!), but that is not necessary to the adventure. The adventure itself is partly a hexcrawl, but it has important keyed locations that will influence any action that occurs therein. Maybe the best way to consider Moon Slaves of the Cannibal Kingdom is as a mini-campaign setting loaded with both wonders and dangers.

This adventure is still relatively new, so I am not going to spoil it for anyone. I will say that there are complexities for the judge to pay attention to, especially in terms of time keeping, that the judge should be certain she fully understands before running the adventure. The adventure is worthy of the effort involved.

Edgar Johnson talks about the module on Spellburn, here.

Far to the west, beyond civilized lands, lie the Tolomak Islands— volcanic peaks covered in pestilential jungle and bestriding sunken ruins. The legends say the Tolomaks are home to treacherous witches, ferocious cannibals, moon demons, and worse! Wise are those who steer well away from these accursed jungle isles, but not everyone is wise… For the legends also speak of power unimaginable and treasures beyond the limits of mortal avarice. Now, under the light of the triple moons, a band of intrepid adventurers sails ever nearer the islands. With luck, they will escape with a fortune; without it, they may not keep their souls.