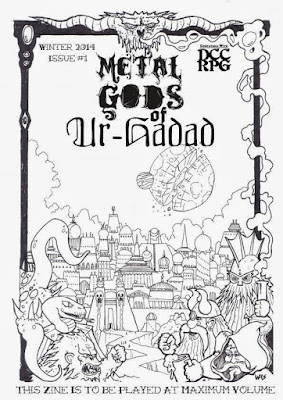 Metal Gods of Ur-Hadad #1 (winter 2014) was written by Adam Muszkiewicz, Edgar Johnson, and Wayne Snyder, with art by Wayne Snyder. The publisher is the Kickassistan Ministry of Tourism.

Ur-Hadad is a setting supported by Adam Muszkiewicz's blog, Dispatches From Kickassistan. Ur-Hadad is not all you will find on the blog, of course. Metal Gods of Ur-Hadad is a zine which puts material about the setting into print. See also Goblin Mini Mart and Edgar's Game Blog.

The Metal Gods: Author Adam Muszkiewicz provides a brief history of the setting, Ore, and man's quest to master it through Metal.

Ur-Hadad, The First City: There is something extraordinarily compelling about the idea of the first city, a dwelling place that predates human occupation. Author Adam Muszkiewicz herein gives a brief description of Ur-Hadad, the First City of Ore.

Men call her the “First City” not because it was the city that they built first, no. The hands of men took no part in raising her walls, burrowing warren and sewer beneath her streets. She was ancient before Man first learned to walk upright and older still when the Elder Races enslaved him and brought him here to serve them. Those who came before the Elder Races had faded into myth by the time those races had taken the city, as had those who came before them, and even those before them, and so on unto the dawn of time. Still, she is the First City.

It would be entirely inaccurate to suggest that flocks of assassins haunt the streets of Ur-Hadad, that guilds of shadowy killers flit across moonlit terraces and down darkened alleys stalking their prey. The Grand Vizier himself has decreed that all such institutions of organized murder are illegal within the city’s walls and, as such, they must not exist there. To suggest otherwise, to suggest that the Grand Vizier’s word was any less than inerrant perfection, would be treason as well as a base and treacherous lie.

The Mercenary’s Guide to Ur-Hadad: Adam Muszkiewicz channels Captain Chogrun Versk of the Brotherhood of the Blue Mark to give interested mercenaries some tips and information about how to survive and profit in Ur-Hadad. Of course, "interested mercenaries" means Player Characters!

Street Kids Of Ur-Hadad: A Zero-Level Funnel Adventure Tool Kit: Now, this is one of the Best Things Ever, and it is written by Edgar Johnson. I have written about it before, here and here, and it remains one of those things that I wish I had written. Essentially, it is a series of tables that creates a unique adventure, ostensibly a funnel, but which could be used easily enough as part of the generation of any city-based adventure.

Dungeon Insert #1: Cave of the Maggot Witch:  Finally, the issue is rounded out with a short encounter by Wayne Snyder, which is intended to be inserted into whatever dungeon or adventure that you wish.