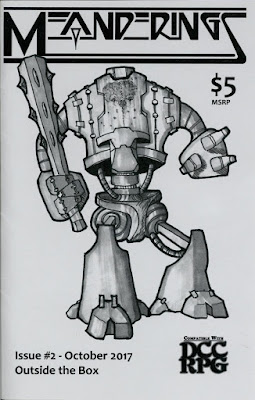 Meanderings #2 was written by R.S. Tilton, with art by Mario Torres and R.S. Tilton. The publisher is Epic Meanderings.

This issue is themed as options, or "Outside the Box". There is a brief editorial, and then the author jumps into the zine proper.

Which of these two interpretations you use will determine how useful this article is to you, which extends the example Deeds in the rulebook to a result of 14+.

Let the Dice do the Talking: A Narrative Skill System for DCC RPG: This is a simple system to introduce misadventures, missteps, and coups to the skill system. This allows you to create results which are more than simply binary success or failure. There is an example on page 8 which I have find somewhat problematical: in the example, a "coup" when tracking affects not what the PC in question learns, but what the tracks actually come from.

Tides of Battle - Momentum in RPGs: Not necessarily DCC specific, this is a simple system that allows things that happen within a combat to affect the attack, damage, and morale rolls of the side with advantage. Although not specific to Dungeon Crawl Classics, this article would mesh well with those rules. The judge would, of course, have to rule on how various Mighty Deeds affected momentum.

No Man's Land: A non-system specific article offering 12 doors that can encourage PCs to explore elsewhere when a section of dungeon is not yet ready.

Occupations of Bastion: Occupations for the City of Bastion, "the last true city in a sea of suffering". Includes a random equipment table with "graft" as an option. While not fully explicated (more to come next issue), grafts seem to be a form of supernatural cyborg enhancement.

Classes of Bastion: The Bulwark against the Tides of the Waste: Class information for the Entombed, effectively brains in jars hooked into a golem chassis. An interesting class that one might easily envision finding a place in Umerica, Hubris, or Mutant Crawl Classics. Because, really, who doesn't want to play a brain in a jar operating a murderous construct?

Dungeon Crawl Classics Weapon Styles: Weapon Tables for Two -weapon Styles: As Issue #1 finished filling out specific Deeds for each basic weapon type, this article considers two weapons used to make a single attack. This is also intended to be a living document.

18 (Jek Touryk): The back cover has the full statistics for an "iconic" DCC character from Bastion. In this case, we are looking at a level 2 Neutral Entombed.

Paperminis: Finally, there is a loose insert on card stock of paper minis for zero-level games, plus an Entombed. According to the back cover, "Issue #2 marks the beginning of the ongoing Paperminis series with 15 occupational paper minis series". The opening editorial also indicates that this will be ongoing.