Fearsome Critters of the Woodlands 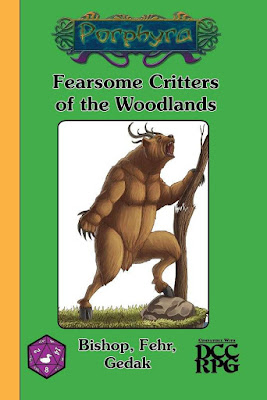 Fearsome Critters of the Woodlands was written by Daniel J. Bishop, Perry Fehr, and Mark Gedak. Art is by Brett Neufeld. The publisher is Purple Duck Games.

Disclosure: I am one of the writers on this product.

Billed as "a monster sourcebook for the Dungeon Crawl Classics Role-Playing Game", Fearsome Critters of the Woodlands is nominally linked to Porphyra, the shared world initially created by Purple Duck Games as a Pathfinder setting. This is not the only Purple Duck DCC product linked (at least in principle) to Porphyra: Purple Mountain and Maiden Voyage of the Colossus, as well the Races of Porphyra, series are also linked to this world.

North American mythology is underutilized in Dungeons & Dragons and its offshoots, with a few exceptions. This mythos is, perhaps, better represented in Dungeon Crawl Classics, with products like Dark Trails Weird Frontiers, The Chained Coffin, and Secret Antiquities, as well as settings like Umerica and the Weird West of Black Powder, Black Magic.

There is, as yet, no overarching treatment of Porphyra for Dungeon Crawl Classics, but there is no reason that this world cannot be DCCified. Links to Porphyra in Fearsome Critters of the Woodlands are easily ignored, though, and judges may make use of these creatures anywhere.

Herein you will find the agropelter, chousarou, fur-bearing trout, hidebehind, hodag, joint snake, rumtifusel, shagamaw, squonk, teakettler, and tripodero. I added some flavor and crunch to several of the creatures, but only the hodag is fully mine. Well, I say "fully mine", but what I actually attempted to do was create a playable creature which was as similar as possible to the folklore. The other creatures, likewise, cleave fairly close to the source material, but are designed to be playable in Dungeon Crawl Classics adventures. Mark and Perry have done good work here.

The squonk is a different creature from the one in The Tomb of the Squonk. Having one product will not lessen the value of the other.

Remote mountains and forest wildernesses are home to strange creatures that are almost never found in dungeons, or any kind of captivity. Traditionally, the only way to get information about these “fearsome critters” is to encounter one, or talk to a lumberjack, miner, or hermit that lives in the area. Discerning what is merely a tall tale, and what is stone cold truth, is a problem for the players to solve!

Whereas many role-playing game monster supplements draw heavily from European mythologies, these fearsome creatures are all drawn from the folklore of North America. As a result, there are several Dungeon Crawl Classics settings where they are already obviously appropriate – areas that deal with Western, Appalachian, or post-Apocalyptic America.

The authors urge you not to be limited to just these settings when introducing fearsome critters. Just as, in DCC, orcs might appear in a Western adventure, or robots in what is otherwise a fantasy setting, so too might hide-behinds lurk within a dank forest near your PC’s home village.