The Children of the Sun 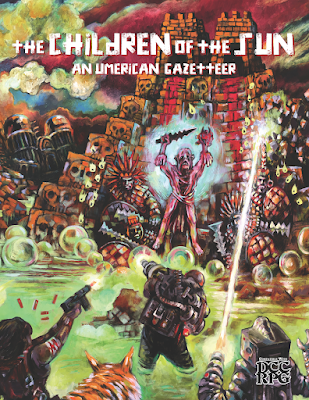 The Children of the Sun: An Umerican Gazetteer was written by Sean Ellis, with art by Nate Marcel. The publisher is Shield of Faith Studios.

This is an add-on for the successful Umerican Survival Guide kickstarter, a sourcebook for characters and adventures from and in the Kingdom of the Sun, a warped future version of Mexico that exists Under a Broken Moon. As such, it has potential use not only in an Umerican campaign, but as a sourcebook for any Western-themed game (such as Dark Trails Weird Frontiers or Black Powder, Black Magic) or post-Apocalyptic game (such as Mutant Crawl Classics).

In fact, if you want to add a little Meso-American flavor to your regular Dungeon Crawl Classics campaign, there is a lot of material here you can use. If you are running the Memories of the Toad God series of adventures, this supplement can help you flesh out the Xilonoc people of that series' jungle setting.

The People: A rundown on the history of Mexico, which acknowledges not only the Forgotten Wars of the Un Men as a factor in Mexico's descent, but goes back to the Spanish invasion and the American drug wars.

The people of the Kingdom of the Sun are well described, with both cultural differences that are certain to come up in play. Enough information is given to handle PCs from the Kingdom, or to describe the area to outsiders seeking (probably fatally) to despoil the region.

New Classes: In addition to Thieves, Warriors, and Wizards from the core rulebook, the People of the Sun may be Barbarians (as described in D.A.M.N. #1), Psions (as described in Mind Games), Mutants (from the Umerican Survival Guide), of one of two new classes:


Goods of Atlan: Weapons, armor, and coinage of the Kingdom.

Magic and Psionics: Includes rules for running Ulli matches, "a game played between two teams with an equal number of players who attempt to throw a psychically charged ball through a vertically hanging hoop."

The Kingdom of the Sun: Describes the difficulties facing life in the Valley of Mexico's polluted environs. Includes rules for spontaneously having your DNA unravel (becoming a mutant), starvation and dehydration, and carnivorous flora.

Patrons and Religion: Everything you need to know, as a judge or player, about worship in the Kingdom of the Sun.

The People of the Sun believe in daily offerings of blood and pain to their gods as payment for continued life. They sacrifice a captured warrior or volunteer at complex ceremonies that occur monthly, and use knives or plant spines to draw blood from their tongue, earlobes, or genitals and sprinkle the resulting “Wine of Life” as a daily offering, sometimes even hourly!

New Patron: Huitzilopochtli: Imagine the Aztec God of War (and the Sun) given new life through a famous drug kingpin from before the Apocalypse. Complete patron information is provided, including three new patron spells.

Monsters Under the Sun: According to the author:

The monsters native to the Valley of the Sun are generally one of three types. Tech creatures are the result of high technology: artifacts that have survived 21st century man or the Un Men of the Forgotten Wars. Mystic monsters have their origin in the redirected soul energy from Hernan’s overloaded mystic web. His memories and imagination were suddenly given life: most are remnants of Mexica folklore… the gods and monsters of the so-called Aztecs. The polluted environment has created its own share of monsters: Mutations have sprung up from the original denizens of the area.

These three types of beasts are not strict delineations. In fact, it is actually possible for a monster to be all three. But these guidelines may help in the brainstorming and creations of your own Monsters of the Sun.