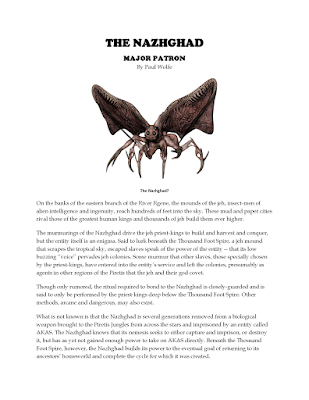 The Nazhghad was written by Paul Wolfe. Illustration is by Chorazin3d. The publisher is Mystic Bull Games.

The Nazhghad was provided by Mystic Bull Games' Patron Monday feature. This is a full patron write-up, including two 3rd level patron spells (as opposed to the normal one each of 1sr, 2nd, and 3rd level).

The Nazghad was featured in The Nazhghad's Invocation in In the Prison of the Squid Sorcerer. This patron is also included in Angels, Daemons, & Beings Between: Expanded, Otherworldly Edition. On his blog post, Paul Wolfe cites Aliens and Prometheus as inspirations.

On the banks of the eastern branch of the River Rgene, the mounds of the jeh, insect-men of alien intelligence and ingenuity, reach hundreds of feet into the sky. These mud and paper cities rival those of the greatest human kings and thousands of jeh build them ever higher.

The murmurings of the Nazhghad drive the jeh priest-kings to build and harvest and conquer, but the entity itself is an enigma. Said to lurk beneath the Thousand Foot Spire, a jeh mound that scrapes the tropical sky, escaped slaves speak of the power of the entity -- that its low buzzing “voice” pervades jeh colonies. Some murmur that other slaves, those specially chosen by the priest-kings, have entered into the entity’s service and left the colonies, presumably as agents in other regions of the Piretis that the jeh and their god covet.