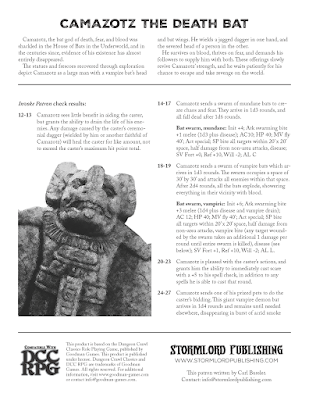 Camazotz the Death Bat was written by Carl Bussler and published by Stormlord Publishing.

This is a partial write-up of a new patron, based off of Mayan mythology. This patron would not only fit into the Brimstone setting of Black Powder, Black Magic, but might be useful for Dark Trails Weird Frontiers, an Umerican campaign utilizing The Children of the Sun, or any other Dungeon Crawl Classics milieu with a Meso-American element to it. Patron spells are not included.

Camazotz, the bat god of death, fear, and blood was shackled in the House of Bats in the Underworld, and in the centuries since, evidence of his existence has almost entirely disappeared.

The statues and frescoes recovered through exploration depict Camazotz as a large man with a vampire bat’s head and bat wings. He wields a jagged dagger in one hand, and the severed head of a person in the other.

He survives on blood, thrives on fear, and demands his followers to supply him with both. These offerings slowly revive Camazotz’ strength, and he waits patiently for his chance to escape and take revenge on the world.