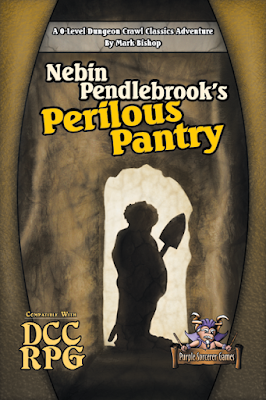 Nebin Pendlebrook's Perilous Pantry is a zero-level funnel by Mark Bishop. Art is by Mark Bishop (including cartography) and Jon Marr. The publisher is Purple Sorcerer Games.

Disclosure: I am not related in any way to Mark Bishop that I know of.

What can I say about this product? It is a real gem of a funnel, which can be played with a lighthearted style that makes it suitable for even young players. It need not be played that way, though, and there are encounters within that can be described as horrific, grisly, or as existential dark comedy if the judge and players desire.

My absolute favorite encounter occurs right at the beginning, setting a tone that can be both grim and absurd as soon as the first door is opened. I wish I had written this one!

When I ran this adventure for my home crew, the result was nearly a TPK, as the players were afraid to release the potential spare PCs they encountered. This is not a fault of the way the adventure is set up...it is more likely bad memories of The Arwich Grinder.

I have no desire to spoil any part of this adventure for anyone. For those of you looking for potential convention-slot funnels, this will fit the bill. It can easily be played in a four-hour time slot.

The tiny village of Bitterweed Barrow is unaccustomed to mysterious tunnels, missing halflings, or the need for brave adventurers, but now it has all three! Can a band of gong-farmers and shoe-cobblers muster the courage to descend into the darkness and confront the terror that waits beyond Nebin Pendlebrook’s unexpectedly perilous pantry?