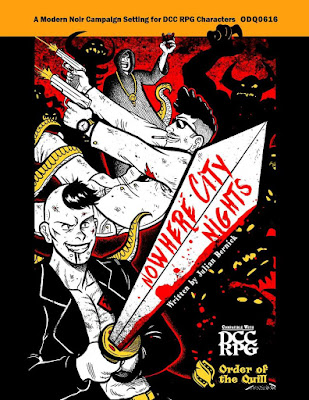 Nowhere City Nights was written by Julian Bernick. Art is by Spencer Amundsen and Jack Kotz. Firearms rules use some rules from Crawl! Fanzine no. 8: Firearms! and Crawling Under a Broken Moon #1. The publisher is Order of the Quill.

Billed as "A Modern Noir Campaign Setting for DCC RPG Characters" or "Modern Occult Noir Based on DCC RPG", Nowhere City Nights offers a modern supernatural take on Dungeon Crawl Classics that uses Noir movies and related pulps (I presume) for its aesthetic. An Appendix Noir would be a useful inclusion in any expansion to the product!

"Nowhere City Nights is a roleplaying game based on the core rules in the Dungeon Crawl Classics Roleplaying Game. (DCC RPG). In Nowhere City, the players take the roles of Gutter Knights, Free Agents or Sorcerers as they scheme and plot and kill in the dim, noir-ish underground of a decadent and declining modern city."

Welcome to Nowhere!: This provides a brief intro to Nowhere City, and its relationship to Dungeon Crawl Classics.

"Nowhere City had a better name once, but no one calls it that any more. It's part of a bigger nation, or it once was, but those old power structures are mostly forgotten. Local corporate overlords rule the day and violent gangsters rule the night. The police are an army that serves both of those masters, depending on the neighborhood and the night and the sack of cash. The working people of Nowhere City pray that they can live their lives in peace and anonymity, without attracting the attention of the city's masters' or worse."

One of the nice things about this intro is that your city - Yes! Yours! - may very well be Nowhere City. And, if it isn't, why not?

That is actually quite brilliant!

Character Classes in Nowhere City: "Sorcerer cults have turned their back on what’s left of civilization in order to serve the extra-dimensional Veiled Ones. Cadres of Gutter Knights are dedicated to exterminating those cultists at any cost. And the slick, unscrupulous Free Agents will go anywhere, kill anyone, take anything… for a price."

PCs in Nowhere City will be Gutter Knights, Sorcerers, or Free Agents. These are, respectively, modified Warriors, Wizards, and Thieves.

Gutter Knights are strict orders of Warriors dedicated to the destruction of Sorcerers. They are sworn to poverty and humility, but all of them have a Vice (which is determined by random roll).

Sorcerers "are the problem that must be solved. The use of magic is predicated on alliances with the Veiled Ones. These powers are so evil that the greatest warriors in the world ignore the mundane corruption and perversity of Nowhere City in order to destroy Sorcerers." Although Sorcerers have pledged their very souls to Chaos, each has a Virtue (determined by random roll).

Free Agents are Thieves with some modern thieving skills, such as Computer Hacking, Demolition Setup, and Infiltration/Bluffing. Every Free Agent has a Vendetta which is, as you probably guessed, determined by random roll.

Gutter Knights are always Lawful, Sorcerers are always Chaotic, and Free Agents are always Neutral. Each gets XP only for completing specific goals of their class. The odds are that a party will contain each class, with their conflicting goals, XP requirements, Vices, Virtues, and Vendettas. Again, brilliant!

Weapons and Gear in Nowhere City: Rules for modern weapons, armor, sainted steel, and other gear.  Crawl! #8 and Crawling Under A Broken Moon #1 are specifically called out.

Backgrounds in Nowhere City: Occupations. It is noted that the "traditional DCC RPG Funnel may not make quite as much sense in a grim, semi-civilized setting such as Nowhere City", which is somewhat ironic, as the first official supporting product for Nowhere City Nights is a 0-level funnel adventure.

Vehicle Chases: For races and chases, with Criticals, Fumbles, and Mishaps. Elegant and fun mechanics.

Nowhere City for the Judge: Notes on establishing the proper atmosphere, a description of the occult Shadow Conflict, notes on the organizational structures of each class, and notes on running a Nowhere City campaign.

Organizations and Employers in Nowhere City: Chapters of the Gutter Knights and descriptions of Sorcerer Cults. These are the primary players in the Shadow Conflict. Sanctum is described for Free Agents. A description of the corporate overlords and violent gangsters would have been welcome here. Considerations of religion are left to the judge.

A Key to the City: A brief overview of Nowhere City, which allows enough space for each judge to make his own Nowhere City. Several important neighborhoods are described. with an eye towards gamable material. "Plot Hooks for the Wild, Wild Waste" provides a full 20 seeds for possible adventures.

Notable Locations of Nowhere City: Some of the places your PCs may visit or avoid. Each has a Location Name, Neighborhood, Address, Description, and Security listing.

Enemies and Opponents of Nowhere City: Provides stat blocks for the people and monsters one might meet in Nowhere City. Well, some of them at least. In a Dungeon Crawl Classics game, there are always monsters you didn't expect, but this will definitely get you started!

Appendix 1: New Patrons: Nowhere City Nights provides three complete new patrons, which may be used outside of the Nowhere City setting if the judge desires. They are:


Appendix 2: Random Events and Encounters in Nowhere City: A table of sixteen events.

Get It Here!
Posted by ravencrowking at 09:22