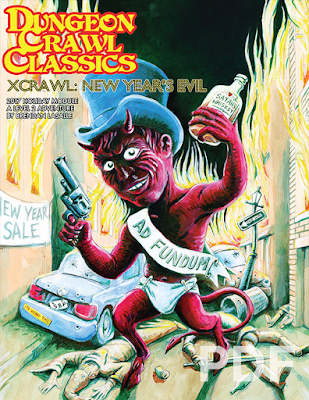 Free pregenerated characters for this adventure are available as a pdf here.

As a resident of Toronto, it was nice to see an Xcrawl adventure set here, although the author declined to come north to run it (the New Year's of its release, at least!). While the city hosting the Extreme Dungeon Crawl event can affect the flavor of a particular outing, there is nothing particular to Toronto (or Canada) in this particular adventure. There are no animated golems shaped like the CN Tower or the SkyDome to bedevil the PCs. Of course, Canada is part of the North American Empire in the Xcrawl universe, and there is a Duke of Toronto.

I am not going to spoil the surprises of this scenario, save to say that the machinations of the Greco-Roman gods worshiped by the North American Empire come into play in a relatively big way.

In his non-Xcrawl DCC work, Brendan LaSalle seems to favor an epic scope where Big Things Happen. This is easy to see in adventures like Hole in the Sky and Neon Knights. It would seem that the Xcrawl universe is Brendan LaSalle working on a smaller scale, but, while the dungeons are limited in scope, the setting is not. The idea that the gods work through their champions, even in the world of live death sports, is an interesting one. The notes on how the party is feted by notables makes them major players in their world, even if the focus of play is on the "athletic competition" itself.

One nice thing in this adventure is a section entitled "Xcrawl in Flux": "Xcrawl Classics is coming! The final version will be a full, stand-alone game using DCC RPG mechanics, with new classes, spells, rules, and excitement! In the meantime, here are some new rules to enhance your game. Note that these are in flux, and as playtesting continues some of these might change when the final version of the game comes out."

Current rules for the Mojo Pool, Grandstanding, and Fame are provided. These are rules I asked for when doing a conversion of Xcrawl: Dungeonbattle Brooklyn to Dungeon Crawl Classics. Mojo has become a little more complicated than the simplified conversion of Dungeonbattle Brooklyn, and seems to owe something to the Fleeting Luck mechanics of DCC Lankhmar! It is perhaps notable that Michael Curtis, among others, receives special thanks in the credits.

Get ready for Xcrawl, the live-on-pay-per-view death sport RPG, now powered by the unstoppably old-school Dungeon Crawl Classics rules! And this holiday season, Xcrawl is breaking open a bottle of over-the-top dungeon crawl insanity, and serving it up for some New Year’s Evil!

Strange things are afoot in Toronto! The spirit of the New Year is driving the Gods to drink, whipping the fans into a frenzy, and inspiring the staff to start the party before the team even makes it to the green room! Can a low-level squad, faced with shady jousters, wet jesters, hell pugs, and cubical zombies – not to mention poetry, puzzles, and traps galore – survive to ring in the New Year? And will the sponsors still pick up the tab now that the dungeon has gone mad?