Synthetic Swordsmen of the Purple Planet 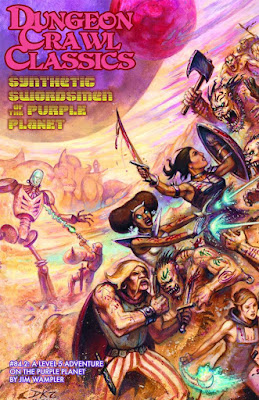 This is the second of several supplemental adventures supporting Peril on the Purple Planet. As with the Barsoom stories of Edgar Rice Burroughs, each additional "tale" adds new elements to the complexity of the Purple Planet without undoing what has gone before.

This is a relatively short, digest-sized adventure, but it packs a lot in for its size. Those familiar with Barsoom will certainly recognize an homage to the Atmosphere Plant which John Carter restores at the end of A Princess of Mars, as well as the polar excursion of Warlord of Mars.

When even the native lifeforms of the Purple Planet begin to wither and die under the weirdling sun’s punishing rays, you and your party of interplanetary freebooters quickly conclude that something is going wrong with the very sky above your heads. What ancient mysteries lie in wait for you at the planet’s northern pole, as you explore the timeworn and failing biosphere plant found sprawling there amongst the ice peaks? Will you save your harsh but adopted home, or hasten its eventual doom?

This adventure features new background material that expands the campaign setting, including a new House of Ascended Masters, new weapons and ancient technology to plunder, and a surprising new species of Kith warriors.

Related Products
Posted by ravencrowking at 16:24