Sword in the Jungle Deep 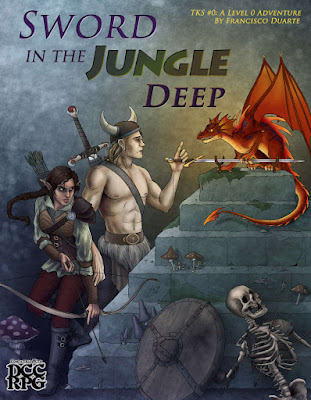 This adventure offers a jungle outing for 0-level PCs. Most DCC funnels are created to be useful in the widest possible range of settings. Sword in the Jungle Deep breaks with that, offering a world in which some things beyond a local village can be known by the PCs. For instance, the city of Caster's Crossing is known far and wide.

Appendix N has a wide range of voices, and there is nothing wrong with offering something a little less modular. If the judge wishes to assume a more "standard" Sword & Sorcery world, they can change parts of the background elements without too much effort.

Parts of the background gave me a strong 3rd Edition or 4th Edition Dungeons & Dragons vibe, but these are, again, easily altered to meet the needs of the judge. Getting past the background, the adventure itself offers an interesting location and challenges that are definitely in keeping with DCC.

I found parts of the writing a bit stilted, but I have been criticized for being long-winded myself, so take that with a grain of salt. I was reminded of the pastiches of Lin Carter or Gardner Fox, although I didn't notice any direct links to those authors' works. The adventure does provide a "TLDR" section for all descriptive text, summarizing not only the highlights of the description, but also a capsule description of how the encounter itself works. That is gold.

Sword in the Jungle Deep makes a strong use of divine politics as its backdrop, although it is a divine politics that reaches far into the past. The Malikim, the remnants of that ancient conflict, are still found in the world of this adventure, dwelling among mortals. That no class is provided for these beings is a shame. Should The Keep Studios decide to explore this world more fully, this would be a welcome addition.

Judges looking to use this adventure may consider picking up The Lesser Key to the Celestial Legion (Psychoda Press) to flesh out their own unique takes on divine creatures and conflicts which are likely to come up if the themes from the funnel continue to play out in a longer campaign.

Long ago Angels waged war on the lands south of the famed city of Caster’s Crossing. In the wake of their awesome power grew a jungle of dreadful perils and treacherous hunters, known by the locals as Erset La Tari. The treasures and ancient relics hidden among the dark shadowy trees have been coveted by adventurers and profiteers for millennia, and now it will be your turn to attempt to uncover them.

Thrown into the wetlands by the devise of a mysterious Elven Warmage, you will need to best the horrors lurking at every corner. Will you be able to overcome the fierce jungle predators? Or the tainted artifacts blocking your way? And what will you do once you are finally face-to-face with the sword in the jungle deep and its fearsome guardian?