Stronghold of the Wood Giant Shaman 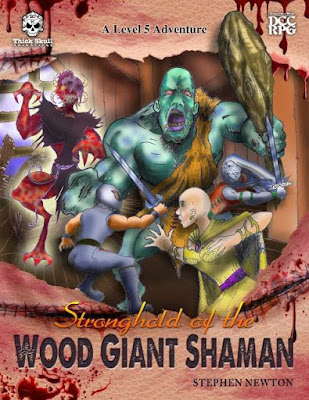 Disclosure: I am given a credit for Editing, Proofreading, and Suggestions. I am also listed in the Special Thanks to  supporters. Finally, this product uses additional patron material from Angels, Daemons, and Beings Between, published by Dragon’s Hoard Publishing, Daniel J. Bishop and Paul Wolfe authors, copyright 2012.

Back in the day, Gary Gygax penned the classic G1 Steading of the Giant Chief, G2 The Glacial Rift of the Frost Giant Jarl, and G3 Hall of the Fire Giant King. For those of us who remember those adventures fondly, the Stronghold of the Wood Giant Shaman creates a certain nostalgic echo reverberating deep in our gamer hearts. The author, of course, is a little bit canny about this connection, but I feel that the assumption is warranted...and, also, as this is me making the claim rather than the author, I don't think anyone can get in trouble!

Stronghold of the Wood Giant Shaman has received an Endzeitgeist review and has been discussed in a Goodman Games community publisher profile. It has also been discussed on Spellburn. At least twice. Yet, either because of its relatively high level (for a DCC adventure), or for some other reason, I feel that Stronghold has never gotten the attention it deserves.

In addition to a fine adventure (which makes sense for the judge to place as a persistent location even before the PCs reach the exalted level 5), the adventure offers a couple of neat rules. The “Occupation Bonus” check is a bit of an extension of the skill system, or, perhaps, just a way of interpreting the skill system bonuses as it exists in the core rulebook. The use of a d22 is a bit of its own thing, meant to show that wood giants "are formidable foes, but still weaker than other giant races". Rules for rolling a d22 using a 1d20 and 1d6 (or 1d3) are provided.  Speaking of which, wood giants get their own special table for Critical Hits.

The adventure also contains several monsters that are apropos for a North American fantasy game, such as the squatch and the catfish troll, making it a potential fit companion for a Shudder Mountains campaign.

The adventure gives some information on a new patron, Veedarkaleesh, but lacks a patron write-up. This is a shame, specifically, because an invoke patron dedicated to Veedarkaleesh might be attempted in actual play. Perhaps a patron write-up might occur in a future Thick Skull compilation?  Or perhaps a future edition of the Gong Farmer's Almanac? Until then, I would recommend that the judge choose their favorite patron and then adjust the spell results to reflect Veedarkaleesh's themes of blood and shadows.

Wood giants—animalistic evolutionary ancestors of hill giants—have emerged from the forests of the Fulthon Mountains to harry and pillage human villages with impunity. Ferocious and feral, they kidnap the weak to sacrifice in their barbaric rituals. Decades ago, your ancestors—stout and brave adventurers of renown—eliminated a previous giant threat, and thus people expect such heroism from you.

But not is all at it seems, as a chaotic force lurks behind the scenes. And if survival against a stronghold of ferocious giants wasn’t challenging enough, the machinations of facing an insane, immortal demon certainly will be…