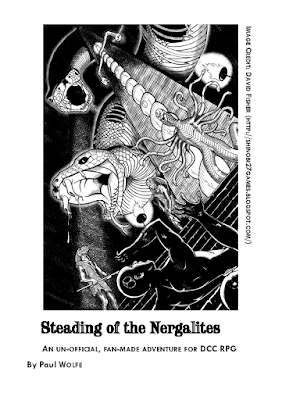 Steading of the Nergalites is a level 1-2 adventure by Paul Wolfe, with art by David Fisher (cover) and Paul Wolfe (cartography), as well as a map image borrowed from UK5: The Eye of the Serpent, which this is an unofficial fan-made sequel of. The publisher is Mystic Bull Games.

As the author explains, this adventure spun off from his own home campaign, utilizing a number of published adventures by himself and others. Like myself, the author found himself converting/adapting UK5: The Eye of the Serpent to Dungeon Crawl Classics. This adventure is the result. Aficionados of DCC adventures might recognize Qo, the Twin-Headed Snake and Destroyer of Worlds, from The Tomb of Curses.

Although the adventure was written to take place in the ancient past, judges could easily have the Children of Qo surviving in some out-of-the-way corner of the world. A tropical setting, with the ravens reskinned to become parrots, would be ideal.

The author says "There’s another piece that I haven’t finished whereby the characters pass either into the realm of Qo (Area 26) or to the Temple of Nergal (Area 22B). Maybe I’ll get to it someday." Until such time as Paul Wolfe gets around to writing the Temple of Nergal, the judge may consider substituting the Barrowmaze. Area 375 of Barrowmaze Complete was once the Great Temple of Nergal and is now the home of the great black lich-dragon Ossithrax Pejorative. The judge would have to do some conversion work - and I would include in this building the lich-dragon anew using the tables for dragons and un-dead in the core rulebook - but the effect would be worth it, and the Barrowmaze offers a wide region to explore!

The ancient shrine of Nergal, God of the White Sun, lies under Rurarik Mountain, a dead testament to the division within the dwarven outcasts’ devotion to the Nergalite prophet, Agol Umberstone. When the Dissenter gathered his own believers around the banners of Qo, the Twin-Headed Snake and Destroyer of Worlds, his Nergalite brethren converted or died at their hands. Now, ages later, the devotees to Qo are starting to stir in their cocoons, ready to emerge in their new forms and their new purpose to free the Destroyer from her eons-long prison!

For Different Versions, Get It Here!