Angels, Daemons, and Beings Between 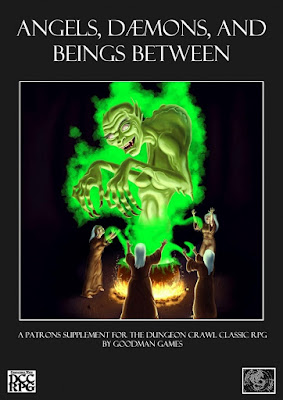 Now we get to an interesting item with a bit of personal history. Having talked about that history elsewhere, I am not going to discuss it here.

Paul Wolfe and I created a set of 13 patrons for Dungeon Crawl Classics, with illustrations by the illustrious David Fisher, Scott Ackerman, and myself. This was in early days for the Dungeon Crawl Classics system, and, if you were looking for patrons outside the core rulebook, there were few to choose from. Designing patrons was, and remains, probably the most labor-intensive part of prepping for a DCC campaign, so this seemed like an extremely useful product to get out there. Based on the reviews, I think we were right.

I wrote in the Introduction, “Potential new patrons repeatedly show up in both official and third-party Dungeon Crawl Classics adventures, but as of this writing, none of these adventures include a full write-up for a patron.” I am very happy to say that this is no longer the case.

The thirteen patrons in this product are:

Enzazza, Queen of the Hive: Where bees, wasps, and their kin gather, the golden voice of Enzazza be heard. She appears as a beautiful woman with golden skin and black hair. She wears fancy clothing in hues of black, gold, and yellow, with surprisingly ornate needle-work floral patterns.  Enzazza is a patron who is exclusively interested in female casters.

Four Maidens of Tylin: The peasants of the Tylin region pay tribute to the Maidens for good fishing, calm waters, and, strangely, for good sex. Many an impotent man and barren woman have unlashed their rowboats from the shores of one of the four lakes, rowed out to one of the shrines and burned incense to a Maiden. Many betrothed, newlyweds, and even couples married for decades, pay tribute to all four, some on a regular basis – either in hope or thanks.

King Halgaz Bekur: The icy reaches of Kran bred men of ice and iron. These men, reavers all, once paused their clannish wars, united under Halgaz Bekur, a witch-king, and descended into the Warm Lands in a froth of rapine and destruction that lasted for generations. Three heroes finally ended the reign of the witch-king, wielding artifacts both found and created. The Warm Lands and its people lay in devastation, but the sun rose on a new age. The soul of the King was released but not destroyed and sank into the earth.

Hecate, Goddess of Witches: Since ancient times, the Witch-Goddess Hecate has interfered in human affairs for unknown reasons. It is certain, though, that she intercedes on behalf of some witches as well as on behalf of those wizards and elves she patronizes.

Hhaaashh-Lusss, Lord Duke of Reptiles: With the mouth of a crocodile, venomous bite, turtle-shell scales, and serpentine body, Hhaaashh-Lusss, the Cold-Blooded One, Lord Duke of Reptiles, is a supernatural being whose very existence is centered upon promoting the interests of all scaly things that creep and crawl through desert, sea, and swamp. He has no interest in the cosmic battle between Law and Chaos, and prefers patient waiting for his own prey. He is slow to act, but resolute in his decisions.

Lavarial, Angel of the Temple: Beautiful and fierce, the Angel of the Temple seeks to protect travelers in night-haunted lands, and to overthrow the crawling legions of Chaos. In many lands, her symbol is a red cross on a white field, symbolizing the meeting of paths, purity of purpose, and blood – both spilled in the service of Law and saved by miraculous healing.

Logos, the Perfect Form: When Logos looked across the cosmos in the long ago, he was at first amused by the “mistakes of creation” he saw – the many imperfect forms, the pain and anguish, love and joy, and the roiling Chaos of living things. Even the stars and planets in their wheeling geometry did not seem so perfect as the world of Logos, moving serenely through existence. After a time, amusement turned to discomfort, and discomfort, in its turn, turned to a form of alien disgust and hatred of all that is not perfect in its behavior and geometry.

Ptah-Ungurath, Opener of the Way: Known by many names, Ptah-Ungurath has always heralded the approach of Chaos. Some know him as The Black Goat, and others call him Father and Mother of Monsters. He appears as a man standing only 4 feet tall, slender and swarthy, with eyes that reflect the swirling stars of the cosmos. Any who views him can sense his sinister majesty, and few can do aught but throw themselves on their knees and prostrate before him.

Ptah-Ungurath knows much about electricity, building glass and metal machines that create gates to the far places of the universe. He is the Opener of the Way beyond space and time, where the titanic temples of tenebrous gods hold sway with strange piping and slow dances like the plod of time itself. Beyond even these, Ptah-Ungurath knows the way to the end of all things, the stinking graveyard of the universe, where worlds lie like putrid corpses and cities are no more than malodorous pustules on their decaying masses.

Radu, King of Rabbits: From ancient times, every creature had a lord or lady as patron of their kind. The King of Rabbits is not powerful, but he is cunning and swift, and his ears can pick up the first hint of danger when its source is yet miles away. He appears as a large rabbit, which can walk as a man at will, occasionally smoking a mixture of lavender and tobacco in a briarwood pipe.

Set-Utekh the Destroyer: Long before men crawled forth upon the face of the world, Set-Utekh and his brothers came to this plane. They sought to tame the great reptiles of the nascent world and to order all things as they desired. They taught men to write hieroglyphics, build monuments to their glory, navigate rivers and shallow seas, and to war. They took wives from the children of men, and their children were worshiped as gods.

Alone among these alien brothers, Set-Utekh sought not to build but destroy. So terrible was the destruction he wrought that the green land of the Sons of Osiris were blasted into a desert. The very existence of living beings upon this world was threatened. Even the plane itself came close to becoming nothing more than whirling dust and motes of ash. The Sons of Osiris therefore rose up, and with the aid of their semi-divine parents bound the Destroyer in a moment of Space-Time deep beneath a pyramid in the once-green land. Lest Set-Utekh become free, the key to his binding was hidden away on another planet or plane beyond the ken of human beings.

Umwansh, Father of the Waves: The great water elemental Umwansh has servants who gird the oceans. He can bring storms against vessels far at sea or see them safely ashore. He is also the Lord of Many Treasures, who has the pick of those things which have sunken from a thousand ships and a hundred drowned lands into the sea. He appears to mortals as a great blue-green man of whatever size he desires and, often, with a long, wavy beard. Clad in shells and scale, water trickles down his skin, and he smells like brine. Umwansh is attended by lesser elementals of various sizes and abilities.

The Arm of Vendel Re’Yune: Deep in the Hellraker Mines is a small octagonal room containing a plain stone fountain. Projecting from one of the walls is a rotted, semi-petrified humanoid arm (from the shoulder to skeletal fingertips). Of the information gleaned by scholars from those that have braved Hellraker and returned, the arm is believed to belong to the sorcerer Vendel Re’Yune, a powerful force in the Wars of Chance. Re’Yune is said to have challenged the very gods, who responded by altering the path of his last dimensional sojourn -- unfortunately, being immortal did not save the upstart sorcerer. He is believed to have lived on in a constant state of painful death trapped within a stone wall. Though rumors persist that the arm has appeared in other places under other circumstances, what is known by a very few is that Re’Yune grants highly volatile but puissant powers to those that enter his service.

Yan Oshoth, Revered Ancestor: From among your ancestors, the spirit of Yan Oshoth reaches across time and space to bring glory to your family name! In turns poet, statesman, and warrior, Yan Oshoth is the greatest of the honored departed your family still lights candles to in prayer and remembers on the Day of the Dead. He will grant you guidance, wisdom, and knowledge. In your direst need, he may even grant you his warrior's arm.

For those who are curious about these things, Paul Wolfe created the Four Maidens of Tylin, King Halgaz Bekur, and what is probably the best patron in the book – The Arm of Vendel Re’Yune. I am responsible for the rest.

I also wrote the following text, which appears on the OGC page of the product. I hope that you take it to heart, and that these patrons see use in other DCC products. You can find references to one or more of these patrons in David Fisher’s The Trolls of Mistwood, Paul Wolfe’s The God-Seed Awakens!, and my own The Revelation of Mulmo.

Dragon's Hoard Publishing is proud to support the Dungeon Crawl Classics role-playing game. To this purpose, the publisher and authors hereby grant permission to use the name of any patron or patron spell in this product by name, and to include the full write-up of up to two patrons, in any product published for the Dungeon Crawl Classics role-playing game, either by Goodman Games or under the Goodman Games DCC RPG Third Party Publishing License Agreement. Prospective publishers must include the copy, "Additional patron material from Angels, Daemons, and Beings Between, published by Dragon's Hoard Publishing, Daniel J. Bishop and Paul Wolfe authors, copyright 2012" in a reasonably prominent location (such as the credits section of the book, or in the licensing section) to obtain this permission.


As some of you may now be aware, David Fisher has managed to work out a deal whereby an expanded version of Angels, Daemons, and Beings Between will now see print.

This would not have happened if Sean Connors had not been willing to make it so. So, thank you, Sean!