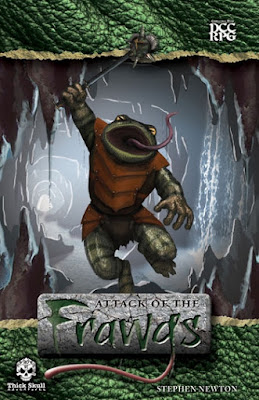 Attack of the Frawgs is a 0-level funnel by Stephen Newton and published by Thick Skull Adventures.

Full Disclosure: I received a "Special Thanks" for my support in this product, as did several others.

I have previously discussed this adventure here. Since that time, a slightly revised version has come out, which builds upon the strengths of the original. Attack of the Frawgs may be followed by The Haunting of Larvik Island. A third adventure in the series, The Lost Tower of Ivok The Mad, is mentioned, but has not been published at the time of this writing.

I have a great deal of affection for this adventure, and recommend it especially for Convention games with 3-4 hour slots. The action is mostly linear, but it is good nonetheless. The gicastor lodge provided an unforgettable experience when I first ran this funnel.

Panic is mounting in the isolated settlement of Sagewood! Frightened villagers speak in hushed tones of “walking frogs the size of men” peering at them from within the woods. And now, a severely wounded local trapper has barely managed to return from Dead Goblin Lake; the fate of his partner known only to the foul creatures that so savagely attacked them.

In a small village without heroes, the townsfolk look desperately towards each other for salvation from this terror. Those who face the creatures will almost certainly pay with their lives...

Get It Here
Posted by ravencrowking at 15:39