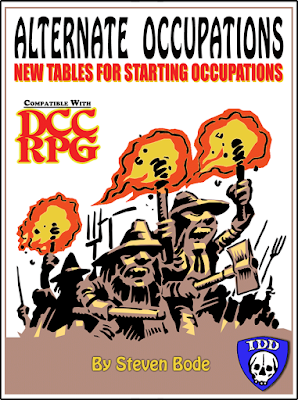 Alternate Occupations, by Steven Bode, is IDD Company's only foray into Dungeon Crawl Classics. This is a shame, because this is easily the single product, next to the core rules, that belongs in every DCC player's and judge's bag of tricks. This is not a particularly sexy product. But it is a very useful product.

At it's heart, this is just an expanded list of occupations. It also has tables that allow you to roll random occupations by race or class. It also tells you what some of those occupations (which have become less common in the modern world, or exist not at all) actually are. The utilitarian use of such a product should be obvious.

The only fault with the product is that, in Dungeon Crawl Classics, there are thieves and warriors, rather than fighters and rogues. And that is such a small quibble, affecting only the headings of their respective class occupation tables.

In addition to expanding the background options for PCs, the class and race tables help in the generation of NPCs. The expanded list of occupations can also be used by the harried judge when determining what goods and services might be available in some little, out-of-the-way village.

Get It Here
Posted by ravencrowking at 18:00