Beyond the Black Gate 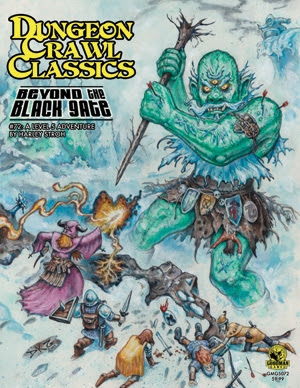 Summoned by a coven of foul witches, the adventurers are bid through the Black Gate and across the multiverse, in pursuit of the crown of the fallen Horned King. There, in the icebound gloom of Thrice-Tenth Kingdom, they must pit their wits and brawn against his dread servants. His sullen citadel looms above the darksome woods and elfin ice caves, ruling over the mystic kingdom. Do you dare to ascend the throne of bones and declare yourself master of the Wild Hunt? Whatever your answer, the land beyond the Black Gate is sure to present a grim challenge for the even the hardiest of adventurers!

Dungeon Crawl Classics #72 is a 5th level adventure by Goodman Games and DCC luminary Harley Stroh. This adventure takes PCs into another the Thrice-Tenth Kingdom - a sort of "Elfland of Giants" - where they become embroiled with a potential patron and are sorely tested.

My admiration of Harley Stroh's writing is already well-known, I assume, but once again he manages to write an adventure that increases my respect for the gentleman. I have not had a chance to run this adventure yet, but it reads like a fairy tale mixed liberally with (Norse and Celtic) mythology, William Shakespeare, and DCC flavor. Mysteries are mysterious, and adventures full of wonder.

Because of the Hyperborean connection, this adventure meshes well with Frozen in Time and the various Goodman Games yuletide adventures. An additional patron, The Horned King, is included (minus write-ups for second- and third-level patron spells).

Get It Here
Posted by ravencrowking at 09:12