The Age of Undying 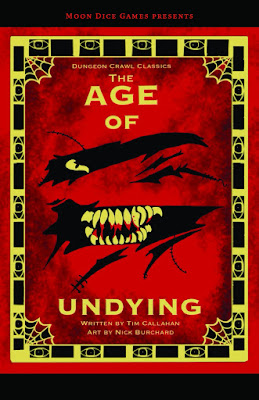 That is not dead which can eternal lie,
And with strange aeons even death may die

Tim Callahan's The Age of Undying takes you into those strange aeons, where PCs simply do not die. Nor does anything else. And if you think that means the PCs are in less danger, think again.

This is not an adventure, but is rather a zine-sized sourcebook for running adventures where nothing dies. It can be used in conjunction with any other adventure, or series of adventures. It discusses how such an Age might come to be - either through the action of the PCs (as in the author's home campaign) or otherwise.

From nastier critical hits to the effects on classes, Tim Callahan covers everything you need.

The value of The Age of Undying is greater than simply running the strange aeon itself. Parts of this work may be useful if you are running an undying PC gained via The Imperishable Sorceress, or to make Laro Chelle the Ring Bearer a larger (or more dangerous) campaign arc. Running Faerie Tales From Unlit Shores, the judge could pen an encounter where Death itself is captured, as in The Soldier and Death.

Get It Here
Posted by ravencrowking at 07:11