Against the Atomic Overlord 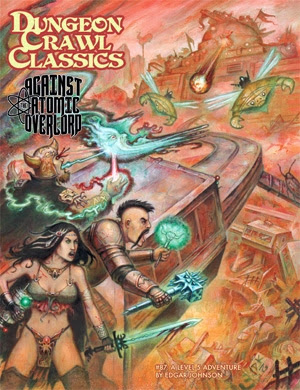 For a thousand years Mezar-Kul has known only war, and now the Overlord reigns supreme. From his gargantuan metal fortress he rules the blasted remains of the planet’s last city. Hope seems lost – until visitors arrive from a distant world, bringing uncanny, magical powers. Your adventurers must pick a path through twisted ruins, ancient missile silos, strange monorail systems, and a conflict with four deadly factions to save a world – or destroy it!

Against the Atomic Overlord by Edgar Johnson adds Mezar-Kul to the list of Dungeon Crawl Classics planets publishes by Goodman Games.

This is a complex adventure, with many moving parts. While I have not yet run it, a read-through suggests photocopying (or printing out) several pages to make them easy to reference. Likewise, while there is enough material to run the adventure without further prep, there are many places where the judge could prep minor expansions if so desired.

Inevitably, this adventure will be compared to Peril on the Purple Planet. The reader is reminded that Peril has an entire boxed set of support materials, as well as additional supporting adventures. The PC's actions in Peril have very little lasting effect on the planetary milieu itself; the same is not true for the PC's actions on Mezar-Kul. One way or another, they will transform the world.

Although it is difficult to imagine a published sequel to Against the Atomic Overlord - it would have to take into account two very different possible outcomes - it is easy to imagine that the world of Mezar-Kul would feature within a judge's expanded campaign setting. In fact, it is easy to imagine a prospective judge reworking the material herein for use with the Mutant Crawl Classics role-playing game...although the finale would have to be strongly reconfigured.

Get It Here
Posted by ravencrowking at 07:06