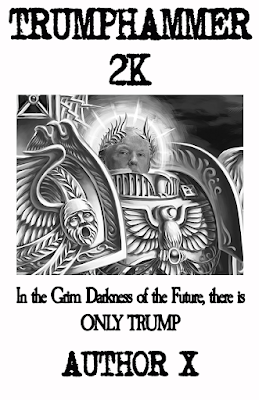 Trumphammer 2K was written by Author X and has no credit for illustrations. It is published by Author X.

Essentially, this is an unofficial mini-setting for DCC RPG games, wherein Donald Trump not only won the election in 2016, but in which there will never be another American election again, Canada has been nuked (for some unknown reason), and Mexico has united with a South American alliance to declare war on the United States under the God Emperor Trump. Players are part of the Resistance, with classes such as the Abortionist, Anon (members of a terrorist hacktivist collective), Embezzler, Euro (mystical European immigrant who has overstayed their visa), Grunt (illegal immigrant worker), Punk, or Thug.

For reasons which should be obvious, this is not an officially licensed DCC product. Author X’s sociopolitical views are the basis of this product, but whether this is a good thing or a bad thing must be determined by the individual reader.

So long as you don't take yourself too seriously, you might find some useful gaming material here. At the same time, it is impossible to describe this product adequately without some political discussion creeping in.

Trumphammer 2K was written in the months prior to the 2016 election, and the author hoped that it would have a “short shelf-life” because the political situation would change. There is satirical criticism of Republicans (in general and individually), the Green Party, the continued militarization of American law enforcement, far Right media figures, and so on. There is no mention of the corporate-leaning Democrats, the Sanders campaign, or the rigging of the 2016 primaries that was exposed by Julian Assange and WikiLeaks. Russia doesn’t come up, and one imagines that is largely because RussiaGate wasn’t a thing at the time.

Trumphammer 2K offers a glimpse into a future (and present) which is far more dystopian than our current reality, but which echoes the fears and experiences of real people. It could be used as the backdrop of a Cyber Sprawl Classics or DCC XCrawl campaign. It could be treated as an alternate plane of existence that our normal PCs somehow find themselves within (illegally, no doubt).  It is also surprisingly robust as a setting for messed-up one shot adventures. I could easily see a luchador from the 2015 Gong Farmer’s Almanac Vol 1 crossing the Great Wall of Trump on behalf of the Unión de Naciones Suramericanas.

Another potential scenario would see a patron send the party into the world of Trumphammer 2K to recover some item needed…or perhaps some portion of spell knowledge needed by the party wizard can only be found among the glowing radioactive ruins of Canada? Mutant Crawl Classics might offer several ideas here, as might the various Umerican publications….

While I am willing to talk politics with almost anyone, please, please, please keep politics out of the comments section here as much as possible. Thank you. Consider this request as part of my projected Zone of Equality, 50’ Radius.
It is the year 2100…

and God-Emperor Trump is the undisputed ruler of the USA. Elected in the election of 2016, he ascended, consolidating the financial, military-industrial and religious complexes into a single force that has forever changed the face of this nation, for the better…

At least that’s what the Talking Heads would have you believe. You’re one of the few that knows the truth, that sticks their neck out to ensure that your children can live in a better world, a world free of Trump’s Tyranny.

There is no peace in this nation, only an eternity of carnage and slaughter and the laughter of a mad god…

Will you submit, or will you fight?

Get It Here.
Posted by ravencrowking at 08:10