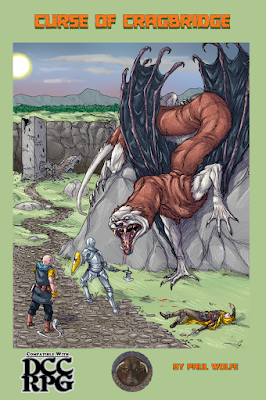 Curse of Cragbridge was written by Paul Wolfe and published by Mystic Bull Games. This adventure is designed for 0-level to 2nd level characters. There are plenty of graphics on two separate pages, by illustrators Jason Sholtis, Wayne Snyder, Jacob Blackmon, Malcolm McClinton, and Gary Dupis, which the judge may use as visual aids.

This is a site-based adventure influenced by a strong storyline going back to the time when Cragbridge Keep was more than an ominous ruin. The keep is haunted, and the story must be discovered to end the ancient curse, but there are plenty of physical foes to make things difficult for the players in their exploration. As an adventure, it brings to mind William Hope Hodgson. There is enough material here for several sessions, possibly spanning across multiple levels of play, with logical reasons why creatures respawn and traps are reset.

Monsters are both interesting and appropriate to the adventure. There are new magic items, of course, but this is Dungeon Crawl Classics, where magic items are meant to be new. In addition, the adventure includes blink as a 2nd level wizard spell. Because of Mystic Bull Games' generous OGC policy, this spell can be used in derivative works by other authors.

For five hundred years, Cragbridge has stood abandoned and cursed. Within lurk the haunts and spirits of those that served Lord and Lady Etheril. Some of these ghosts inhabit the forms of strange insectile humanoids while others guard tombs deep beneath the shattered bridge tower.

Recently, the good knight Sir Dougal Skavok disappeared in the ruin, and when a search party returned, they too were missing a few members. The party carried strange treasures found there: coins marked with a double-headed raven, gemstones of great value and other ornate and gilded items.

They also spoke of the evils that lurked in Cragbridge, cursed forever by the vengeful Lady Etheril.

Get it Here.
Posted by ravencrowking at 09:13