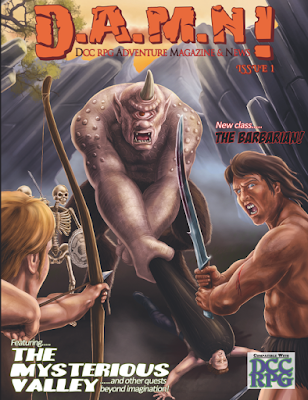 Disclosure: I wrote two pieces for this issue, contributed a spot illustration (p. 54), and contributed (along with the illustrious Paul Wolfe) some cartography (p. 27). The cover illustration depicts creatures from the adventure I wrote for this issue (more on which later). I am credited as a contributing editor. And I have known the editor, Garett Oliver, for a very long time, which he alludes to in his "Note from the Editor".

When Garett decided to create D.A.M.N., he asked me if I would contribute to the first issue. Of course, as a friend, I was delighted to do so. Around this time the estimable Ray Harryhausen passed, and I was asked if I would create something that was an intentional homage to him. The Mysterious Valley was the result. It received the cover slot - with an intentional nod to the Barbarian class by Godric McKellan - largely because of Mr. Harryhausen's passing.

It has to be said that, when D.A.M.N. was being put together, Garett had no background in editing or layout. What he had was a real desire to see the thing through. Although he made a valiant effort to jump into the fray, he found himself facing some personal problems shortly after getting started. The result is a contributing editor credit, as I helped him with both layout and his own adventure in this issue.

I don't think that there is anybody involved who would not like to see D.A.M.N. #1 appear in print one day, or, even more importantly, a long line of D.A.M.N. issues to follow. I tried to make both happen, but I am no professional editor, and there were issues which I was unable to resolve. None of these issues relate to bad faith on anyone's part...just circumstance and timing. I hope one day to contribute to D.A.M.N. #2. Until then, within this issue you will find:

Forsaken Reavers of Praeder Peak: Author Paul Wolfe presents an adventure designed for 2nd-4th level characters. As it appears first in the magazine, this may be the first mini-hexcrawl published for Dungeon Crawl Classics. Not only does this adventure include the memories of dead Viking-like warriors, but it offers a write-up for Weal, the Queen of Abominations, including the 3rd level patron spell, soul bind.

Let it be known that I like Paul Wolfe, and I like his work. Moreover, when I needed better cartography to layout The Snow Queen, Paul stepped in like a boss. As with Curse of Cragbridge, Paul brings events from the past into focus for the PCs, and their understanding of events from long ago ultimately determines how successful they can be in the adventure. This is a cool element to incorporate, and it reminds me of some of Robert E. Howard's non-Conan work.

It was my hope that The Mysterious Valley could provide a campaign backdrop to other Dungeon Crawl Classics adventures. Adventures could be set in the Ruins of Durdarian, the aforementioned Ruined City, various cavern systems, or Harhassan's Tower itself. Eventually, a group could brave the Creator's Dragon and become defacto rulers of the Valley itself. As a result, The Mysterious Valley contains a variety of potential allies, encounter areas, potential foes, and levels of difficulty.

If you, or anyone you know, has used the material in this way, I would love to hear about it.

The Snow Queen: This adventure, by Garett Oliver, is, as far as I know, his only published adventure, for Dungeon Crawl Classics or otherwise. It uses a creature from Bygrinstow's admirable Appendix M blog, with permission. Although a linear adventure as written, there is room for expansion by the interested judge. In addition, there are rules for extreme cold, which could be used in almost any DCC campaign taking place in Arctic or Antarctic areas.

New Class: The Barbarian: Author Godric McKellan's version of the Barbarian, which includes a 0-level occupation list because barbarians are treated similarly to how racial classes work in Dungeon Crawl Classics. A fishmonger or a gongfarmer does not simply decide to be a barbarian. You have to be born to it. Interestingly enough, a 5th level Chaotic barbarian is a "Dragonrider"...what that actually means in game terms is left to the judge and his players to decide.

Converting Material to DCC RPG: This article was an expansion of a blog post on Raven Crowking's Nest. Garett requested in, in particular, because conversion of materials when D.A.M.N. #1 came out was a bit of a hot topic. The plethora of Dungeon Crawl Classics materials now available eases the need to convert from other systems, but probably not the desire. Not only are there classics of early gaming that would make excellent Dungeon Crawl Classics adventures (I myself have used, among others, The Albuquerque Starport, The Sinister Secret of Saltmarsh, Eye of the Serpent, Death Frost Doom, and Joseph Goodman's own The Mysterious Tower as DCC adventures).

The existence of games specifically intended to reproduce the worlds of Appendix N fiction - games like The Dying Earth, Conan: The Roleplaying Game, Hawkmoon, MERP, and The One Ring - provide obvious resources that one may like to convert. TSR's adventures set in Lankhmar or Pelgrane Press' adventures set on Vance's Dying Earth, provide a wealth of potential material for the Dungeon Crawl Classics judge eagerly awaiting Goodman Games' products for these worlds. If the judge is so lucky as to own a first print of the AD&D Deities & Demigods cyclopedia, why not use it to stat out creatures from the Cthulhu and Moorcock mythos?

If you are awaiting Mutant Crawl Classics or using Crawling Under a Broken Moon, why not convert old Gamma World or newer Mutant Future adventures? You may discover that your conversions lead you in wholly new directions, and spawn original materials of your own.

If you enjoyed the first issue of D.A.M.N., please leave a note in the comments section, below. I know that Garett felt as though he let the community down when he was forced to pursue economic goals over passion (eating and having a roof sometimes take precedence over gaming), I would really like to be able to show him how much that first issue was actually appreciated by the DCC community.

Get It Here.
Posted by ravencrowking at 09:49